September 14, 2012 by Jessica Gomez No Comments

Honduras Memorandum of Understanding on Security.

The government of Honduras, led by President Porfirio Lobo Sosa, signed a Security Memorandum of Understanding with the U.S.A. on Thursday, September 13th. 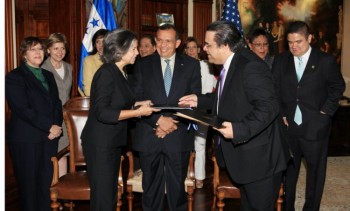 The document outlines the urgent need to strengthen bilateral cooperation in designing and adopting practical measures to address threats to public safety in Honduras. It states that the United States of America, through the Central America Regional Security Initiative (CARSI), and relief and development programs related to public safety, is committed to complement efforts of the Government of Honduras to develop the capacity of its institutions of law, law enforcement, and prevention programs, alongside community development.

They seek enhanced cooperation, focus and structure in joint efforts towards shared objectives. Achievements represent shared goals, including preventing the entry of illegal drugs into the territory of Honduras, intercepting the drug once within the country, ensuring the effectiveness of justice officials, strengthening the rule of law and other democratic institutions, protecting human rights, eliminating corruption, preventing crime and violence, and assisting communities most adversely affected by crime and violence.

Within 45 days of the signing of the Memorandum of Understanding (MOU), a separate operating plan will be devised, with specific actions defined, deadlines, and staffing and resources that each government can make available to achieve the objectives outlined.

The two Governments identified the following five goals to serve as the basis of their cooperation on public safety:

The MOU took effect from the date of signature by both Governments, and will last indefinitely, but the Governments will evaluate cooperation under the MOU annually to ensure that they continue to support a joint action strategy for the “safety” of the Government of Honduras.

The Governments may agree to modify or amend the MOU in writing. Any Government may terminate the MOU, but it is suggested they aim to provide a written notice 90 days in advance to the other Government. Unless it is amended to establish the contrary, the MOU will remain in effect until terminated by either Government.

Nothing in the MOU is intended to repeal or amend the laws of the United States of America or the Republic of Honduras. The MOU is not intended to create, confer, grant or authorize rights, privileges, or obligations to any person, public, or private entity, according to national law or international law.

It was signed in Tegucigalpa, Honduras on the thirteenth day of September, two thousand twelve, in English and Spanish, by
Arturo Corrales Álvarez and Maria Otero