The Union of the Executive Directorate of Revenue (Dirección Ejecutiva de Ingresos – DEI) is meeting with the labor unions in San Pedro Sula today to analyze the new Social Security Act in depth.

Union President, Darwin Barahona stated, “The law contains errors of substance and is not what was approved in the National Congress.” 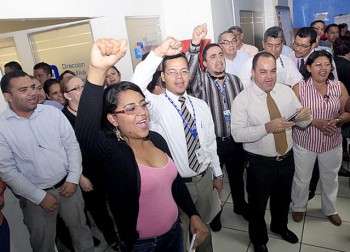 Barahona claims the President of the Legislature, Mauricio Oliva, and a National Party (Partido Nacional) caucus have found profound changes in the new arrangement.

Therefore, the unions are gathering together to review the documentation, as they believe the ordinance contains items that take away rights of both the workers and employers. Employers are now required to pay four percent of their payroll to the State, and workers are outraged that their right to “prestaciones” is being eliminated, a right they have been granted throughout history.

The Union President concluded his announcement of the Social Security Act review by asking, “If this law does not benefit the employee nor the employer, then who benefits?”