April 2, 2012 by samuel contreras No Comments 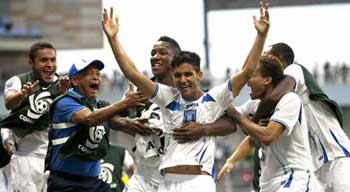 Andy Najar could not hide the big smile nor the celebration he and his Honduras teammates were enjoying after qualifying for the Olympics on Saturday night.

“It’s going to be important thing for me in my career,” he said. “I am so excited about it. . . . It is every player’s dream to play in the Olympics. This is my opportunity.”

Najar had even more reason to celebrate. It was his right-wing cross that found second-half substitute Gerson Rodas for the winner in the 115th minute to give “Los Catrachos” a 3-2 victory over arch-rival El Salvador and earn them a place in the London Olympics.

The D.C. United midfielder – who was born in Honduras but moved to the United States as 13-year-old admittedly is no historian of Honduran soccer. He wasn’t aware that this would be Honduras third trip to the Olympics since 2000. He didn’t seem to mind.

“This is going to be my first one,” Najar said. “I am so excited about that. I don’t know anything about the past. I am so excited.”

Excited was the key word for the 19-year-old Najar, who repeated it several times in a post-match interview at LIVESTRONG Sporting Park to describe himself and his teammates.

When referee Jair Marrufo of the United States blew his final whistle, several Honduran players threw their arms into the air, while others fell to the ground.

“I don’t have the words to describe this moment,” Najar said. “It is my first. I am so excited. I want to say thanks to God.”

Rodas can say some thanks to Najar, who found himself some room on the right side and had a hunch he could get a cross through to a teammate.

“I saw the goalkeeper. He was at the far post,” Najar said. “I decided to cross to that second post. I knew that someone was going to score the goal.”

While he was in an exuberant mood, Najar could was not able to share his joy with his family and friends.

“Not yet. My phone is dead,” he said laughing.
He could not tell them how excited he was about reaching the Olympics.