Honduras U-17 Classifies to World Cup in Chile 2015 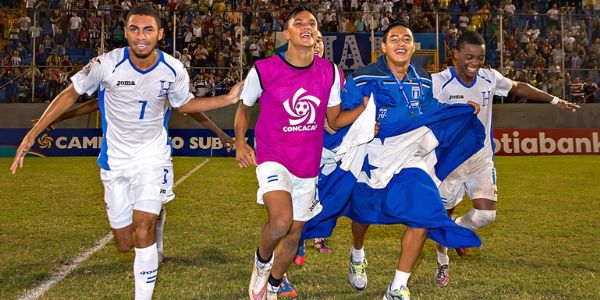 Honduras players (pictured) celebrate after advancing to the CONCACAF Under-17 Championship final and qualifying for the 2015 FIFA U-17 World Cup with a win over Guatemala on March 11, 2015, in San Pedro Sula, Honduras.
(Photo Courtesy: Mexsport)

The tournament host finished atop Group A, one point ahead of Jamaica (3-1-1, 10 points) and the United States (3-1-1, 10 points). The Jamaicans claimed second place on the head-to-head tiebreaker thanks to their 1-0 win over the U.S. in the second game of a tripleheader at the Estadio Francisco Morazan.

Honduras took the lead and gained a man advantage early in the encounter, when goalkeeper Gilder Lemus fouled Darixon Vuelto in the penalty area, causing him to flip in the air. Referee Mathieu Bourdeau pointed to the spot and showed Lemus a yellow for his infraction. Then, Guatemalan defender Mario Rodas was ejected after kicking the ball at Bourdeau from eight-yards away.

See the Honduras vs Guatemala Game Recap and Highlights Video