February 6, 2013 by Zak Montenegro No Comments 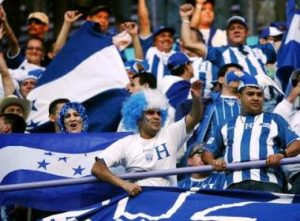 Honduras Fans line up for Hexagonal game vs USA in San Pedro Sula – Over 30.000 tickets sold so far

As each hour passes the tension grows for the Honduran players called to play the first match of the hexagonal.

The Honduras team is putting their 100% as demonstrated in yesterday’s practice. The starting lineup will be for the goalkeeper, Noel Valladares with the side defense being covered by Arnold Peralta and Juan Carlos Garcia, and the central defense being left to Maynor Figueroa and Victor “Muma” Bernardez.

For midfield players there’s a doubt between Luis Garrido or Jorge Claros, with the other player being Roger Espinoza. The laterals covered by Mario Martinez and Boniek Garcia.

There is no doubt on who will be playing the attack line, which is Jerry Bengston with Carlo Costly. Suarez, the technical director said “We are at home and we must feel it, we must look for triumph. They may be big, but we must be smart, in the field it’s just eleven versus eleven and we must be encouraged to win.”