News from Honduras · Sports in Honduras

Mejía won his first round, 6-0 to José Rocha of Mexico, and overtook Luillys Perez of Venezuela 8-2, displaying a virile strength and refined technique. The Honduran athlete, in the final match, ended up on the receiving end of a windmill throw, delivered by 4-0 Cuban Gold winner, Yasmany Lugo. 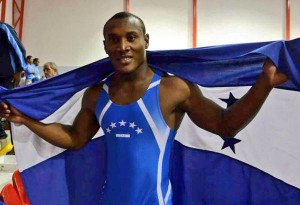 Despite the fact that the Honduras Olympic Committee (Comité Olímpico Hondureño – COH) was only able to invest six million lempiras in 19 athletes, a fraction of the amount invested by other countries, the training received from the Center for High Performance of the Honduran Olympic Committee (Centro de Alto Rendimiento del Comité Olímpico Hondureño) enabled this competitor to bring home the silver.

“It’s inexplicable to me, because I have achieved this goal thanks to God. I feel happy,” exclaimed the 20 year-old.

Mejía said he had hoped to give Honduras the first gold in the history of the Pan American games, but ran into an opponent with more than 25 years’ worth of experience.

“I am happy with the silver medal, although my dream was for the gold, but we must continue working to qualify for the Olympic Games in Rio de Janeiro in 2016”.

The young athlete’s confidence did not waiver in his goal to achieve a medal, “…from the beginning I felt committed and confident, this is dedicated to Honduras.”

This is the sixth Pan American win in Honduras history, and curiously, the second silver medal achieved on Canadian soil. The first silver came from the national soccer team in the Pan American tournament in Winnipeg 1999.