March 8, 2012 by samuel contreras No Comments 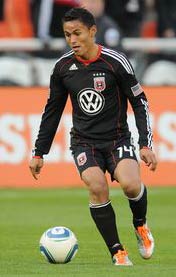 Andy Najar has been included on Honduras’ 28-man preliminary roster for Olympic qualifying, which will be narrowed down to the final cut on Friday.

The speedy, 18-year-old, playing now for D.C. United, trained with Tottenham in the off season and has been in fine form during the preseason.

Representatives from the Honduras coaching staff had met with D.C. United front office personnel earlier, during the preseason, to talk about Najar’s potential international inclusion. He has two caps with the senior national team, playing in September friendlies against Colombia and Paraguay.

Honduras will be playing its group games in qualifying at the Home Depot Center against Mexico, Panama and Trinidad and Tobago.