Indigenous Communities Speak Out Against Oil and Gas Exploration in Honduras

November 25, 2014 by Hector Martinez No Comments

Inez Eduardo Arzú finds a patch of shade and sits next to the wall a small wooden home in the coral reef cay community of Chachahuate. The clear, turquoise Caribbean waters surrounding the archipelago sparkle in the midday sun. The Afro-Indigenous Garifuna residents of the Cayos Cochinos off the coast of Honduras and their mainland sister communities have fought long and hard for their rights to live and fish in the cays. 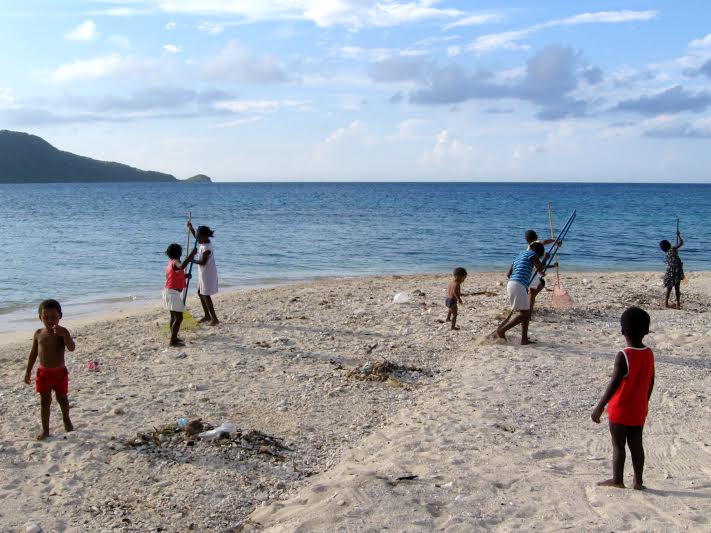 In 2013, the Honduran government granted BG Group oil and gas exploration rights in a 35,000 square kilometer block off the coast of the Moskitia. Miskitu and Garifuna community leaders are speaking out to defend their territories from oil and gas activity. In contrast to Belize and Costa Rica, where environmental NGOs, scientists, and others formed powerful national alliances to fight oil exploration, in Honduras, Indigenous opposition is as of yet largely unheard and unsupported.

Arzú is worried. He and other local subsistence fishermen have heard about the devastating impacts of the 2010 BP oil spill on the environment and fisheries in the Gulf of Mexico. Offshore oil and gas exploration is underway in Honduran waters, but no one consulted the Garifuna communities in the cays or others spread out along the Caribbean coast.

“No one has approached to consult us about oil,” says Arzú. Now 50, he has lived in Chachahuate since he was 12 years old. He’s concerned about the impact offshore industrial activity could have on the sea and its fish, and he’s not the only one.

Indigenous Miskitu and Garifuna communities are speaking out to defend their territories from oil and gas activity. Honduras signed a contract with BG Group in April 2013, granting the British multinational rights for the exploration of oil and gas in a 35,000 square kilometer block off the coast of the Moskitia, a remote area primarily inhabited by Miskitu, Tawahka, Garifuna and Pech indigenous peoples.

The contract was presented to Miskitu communities six months after it was signed, but the so-called consultations were not without incident. Many residents denounced that the process billed as consultation was merely socialization of the contract after the fact. In the community of Barra Patuca, more than two hundred local residents walked out of a session to protest the process, maintaining their opposition to any and all oil and gas activity in the region.

Edgardo Nelson Escoto speaks about his community with pride. Located at the mouth of the Patuca River, the second longest river in Central America, Barra Patuca is one of the largest communities in the Moskitia. The vast majority of its several thousand inhabitants are Miskitu. The community has a policy of not selling lands to outsiders, says Escoto, a member of the Barra Patuca community council. Some communities further inland in the Moskitia are in favour of oil and gas activity, but in Barra Patuca, there is fierce community opposition.

“On the coast, we are opposed because the problem will most impact those of us living closest to the sea,” says Escoto. “In Barra Patuca, the majority of the people don’t want it.”

Escoto was out fishing in cays off the coast of the Moskitia for a few months when a community assembly was held in the fall of 2013 to discuss the BG Group contract. But there was opposition nearly across the board. “The people of Barra Patuca didn’t want it. The teachers, the church priests and pastors, almost everybody – they were against it,” says Escoto.

BG Group’s current exploration activities aren’t the first time oil companies have taken a crack at Honduras. Concessions have been issued for nearly one hundred years, and the first well was drilled in 1920, but there has never been any significant production. Offshore drilling off the coast of the Moskitia yielded several barrels in a 1973 well drilled by Union Oil. Shell and Mobil also drilled in the area. The most recent wells were drilled in the Moskitia in the early 1990s by True Cambria Oil. The Honduran government has sought to promote oil and gas activity during several recent administrations, and has contracted exploration projects as recently as 2008, during the presidency of Manuel Zelaya, which was cut short by a June 2009 coup d’état.

Escoto remembers the last time onshore oil exploration activities were carried out near Barra Patuca. The seismic lines went right through community lands, close to where he farms rice and tilapia.

Along with oil and gas interests, the Moskitia is home to increasing militarization by Honduran and US forces. In September 2014, Miskitu communities and organizations denounced a slew of abuses and human rights violations by security forces, ranging from illegal raids and death threats to torture and threats of sexual violence. A Southern Command forward operating base is located in Mocorón, a site previously used by the US to support the CIA-trained Contra forces in their attempts to overthrow the Sandinista government in neighbouring Nicaragua in the 1980s.

In May 2012, four Indigenous civilians were killed and several more wounded when a drug war operation agents opened fire on a passenger boat near Ahuas. DEA agents advised the raid, the Honduran police officers involved were vetted by the DEA, and the helicopters used belonged to the US State Department. Escoto’s son, 22 years old at the time, was one of the passengers on the Patuca River that night. He was shot in the back and arm, but survived. Now disabled, he struggles to provide for his young children.

Remnants of past oil and gas exploration have been left behind in the area, says Escoto. “They took their machinery out by boat, but the tubing, scraps of metal, that kind of thing, were left strewn on the ground,” he says. “As far as Barra Patuca goes, we don’t want any of these kinds of projects.”

BG Group recently concluded an aerial exploration phase, and will continue exploring through 2015. In October 2014, the Honduran Minister of Natural Resources and the Environment said that the results of the exploration are expected at the end of 2015. If commercial quantities are found, there will be a 20-year exploitation contract and Honduras will receive 15 percent of the extracted oil or gas while BG Group recuperates its investment costs.

A new law regulating oil and gas activity has been on the government’s agenda for a while. In fact, a one-year moratorium on concessions was put into place in 2011 to allow time for a new hydrocarbon law to be passed. Legislative reform is still pending, but the BG Group contract went forward regardless. The Latin American Energy Organization initiated reviews of the regulatory framework and oil and gas potential in Honduras in 2012 as part of a five-year project funded by the Canadian Department of Foreign Affairs, Trade and Development. The Hydrocarbon Law still currently in effect is from 1984.

New law or not, Garifuna communities in the Cayos Cochinos are worried any kind of offshore oil or gas activities could impact the coral reefs that provide the fish and seafood on which they survive. Many residents share Chachahuate community council president Reinaldo Colón’s concerns about the fishing areas in and around the cays.

“Just beyond here is our fishing area,” says Colón, gesturing to the edge of the archipelago of cays at the southern end of the Mesoamerican Barrier Reef. The cays are not within BG Group’s offshore exploration block, but seas and oceans aren’t known for their clean-cut borders, he says. “If those wells are drilled and there were an accident, you would think the spill wouldn’t just stay there.”

No one came to let Chachahuate or other Garifuna communities know about the exploration contract, let alone seek their free, prior and informed consent as affected Indigenous people. The Garifuna came about when shipwrecked Africans being trafficked in the colonial slave trade mixed with local Indigenous Arawak and Carib people on the Caribbean island of Saint Vincent in the early seventeenth century. They were evicted from Saint Vincent by the British in 1797, dropped off on an island off the Honduran coast, and spread out along the Caribbean coast from Belize down to Nicaragua.

The Honduran state continues to fight a losing battle in the Inter-American human rights system, attempting to deny the internationally recognized Indigenous identity of the Garifuna. Honduras routinely violates international treaties regarding consultation with Indigenous peoples, Garifuna or not, and the contract with BG Group was no exception.

“The government didn’t even send anyone here,” says Colón. “I’ll put it this way: we basically don’t matter to the government.”

Honduras isn’t the only Central American country to grant offshore oil and gas rights in the Caribbean in recent years. US companies Noble Energy and Infinity Energy are currently exploring in Nicaraguan waters. A spill in the region wouldn’t be without precedent either. A major oil spill occurred in 1986 when a tank ruptured at a Panamanian refinery facility owned by Texaco. More than 50,000 barrels of crude spilled into the Las Minas bay, devastating local coral reefs and mangrove forests.

In Costa Rica, a concession for oil exploration was granted by the Costa Rican government in 1998 to a small US company, which then sold partial concession rights to Texas-based Harken Energy Corporation. Environmental organizations, Indigenous communities, marine biologists, and dozens of other local and national groups formed the ADELA alliance to fight the planned activity. A few years and a court battle later, the oil companies’ environmental impact assessment study was rejected by the government. In 2005, the Costa Rican government terminated the contract. A moratorium on all oil exploration and production was instated in 2011, and in July 2014, the government extended the ban through 2021.

In Belize, environmental, tourism and other organizations joined forces to mount a campaign against oil drilling contracts off the coast along the Mesoamerican Barrier Reef. The inclusion of the iconic Blue Hole atoll in one the areas slated for exploration galvanized the movement, and in 2012, more than 10 percent of the country’s registered voters participated in a People’s Referendum organized by the Belize Coalition to Save Our Natural Heritage, among others. In 2013, the Supreme Court of Belize ruled the offshore oil drilling contracts in question null and void, determining that the government failed to assess their environmental impact.

Unlike in Belize and Costa Rica, environmental NGOs in Honduras have largely remained silent on the issue. Many of the coastal and marine protected areas home to important coral reef, mangrove, wetland and rainforest ecosystems are co-managed by foundations with funding from international conservation organizations, foreign aid, and international financial institutions. Opposition to oil and gas activity that threatens these areas, however, has been predominantly voiced at the grassroots level.

Back in Chachahuate, Colón says it’s time for more communities to speak out. “It’s important that we take a stand as Garifuna, and not just here in Cayos Cochinos. The whole Garifuna corridor, all the way out to the very last community, needs to become aware of this,” he says.

“We’re all responsible for this coast, not just us here in Chachahuate,” says Colón. “We need to reach out. If we work together, we’ll be stronger.” Written by Sandra Cuffe upsidedownworld.org