TEGUCIGALPA, Honduras – Here’s how big Nov. 29 was in Honduras’ counter-narcotics fight: The seizure of 24,250 pounds of pseudo-ephedrine represented nearly half of all of the 42,990 pounds of narcotics confiscated nationwide in 2012.

About 24,250 pounds of pseudo-ephedrine were seized on Nov. 29 by counter-narcotics agents in the village of Pata de Gallina in the department of Yoro, Honduras, marking the largest seizure of pseudoephedrine in the country’s history. (AFP)

The bust, which occurred in the village of Pata de Gallina in the department of Yoro, was the largest seizure of pseudoephedrine – used to make synthetic drugs – in the country’s history.

Of the 42,990 pounds of narcotics seized so far this year entering the final week of 2012, 18,739 was cocaine, representing a significant increase compared to the 10,410 pounds seized in 2011, according to the National Office for Combating Drug Trafficking.

Honduras’ success in its counter-narcotics fight is rooted in being involved in Operation Martillo, a joint effort of Western Hemisphere and European nations to curtail illicit trafficking routes on both coasts of the Central American isthmus.

The country also sought the advice of Colombia’s National Police, the Organization of American States (OAS) and the Chilean government, which all concluded narco-trafficking and organized crime were threatening Honduras’ national security, according to the Secretary of Foreign Affairs Arturo Corrales Álvarez.

“In the departments of Colón, Yoro, Gracias a Dios and Olancho, we need to take radical steps because there are more crimes related to drug trafficking [in these areas],” said Wilfredo Méndez, the executive director of the Center for Research and Promotion of Human Rights in Honduras (CIPRODEH). “We have to show our willingness to do this.”

Honduras also entered into a Memorandum of Understanding with the United States, which led the Central American nation to implement the following:

“Though narco-trafficking and organized crime pose an equal threat to all countries, the situation is worse in Honduras because it is a transit country for narcotics shipments,” Corrales Álvarez said. “Therefore, the country has ratified international cooperation agreements that will allow it to increase public safety and combat drug trafficking and crime.” 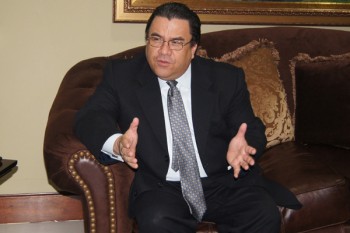 Honduran Foreign Affairs Secretary Arturo Corrales Álvarez: “Though drug trafficking and organized crime pose an equal threat to all countries, the situation is worse in Honduras because it is a transit country for narcotics shipments.” (Kay Valle for Infosurhoy.com)

“In the region, the problem goes beyond specific countries because the drug trade is a geopolitical problem, yet Honduras is at the center of it all,” he said. “We must also take into account the collateral problems, such as weapons trafficking and human trafficking.”

Among other initiatives to increase the country’s security, Honduran officials also fired numerous corrupt National Police officers, and lawmakers amended Article 102 of the Constitution to allow Hondurans to be extradited if they are wanted on narco-trafficking, organized crime or terrorism charges.

“[Through these actions, the government] is seeking to design and adopt practical measures to address the threats to public safety in Honduras,” said Corrales Álvarez. “During a six-month period, our agenda focused on diagnosing the problems and defining the solutions, and we have done that.”

Corrales Álvarez also said Honduras’ inclusion among 14 participating nations in Operation Martillo has “strengthened the country’s border defenses against drug trafficking, and the monitoring allows us to strike significant blows against the drug trade.”

Operation Martillo consists of offshore monitoring, along the Pacific and Atlantic coasts, to intercept narcotics entering Honduras to prevent their transit to other nations.

Nearly 90% of the cocaine that reaches the United States comes through Mexico and Central America, according to the United Nations International Narcotics Control Board.

“This major operation has succeeded in reducing the quantities of the drugs coming in, as well as the number of landings by planes operated by the drug trade in recent years,” said Corrales Álvarez.

Five narcotics-carrying airplanes were seized in Honduras this year after three were confiscated in 2011, according to the Administrative Office of Seized Goods (OABI).

Honduras also took part in the Fourth Meeting of the Mexico/Honduras Bi-National Commission, which was held in Mexico City in September. The countries agreed to carry out prevention workshops in Honduras and Mexico and improve the training provided to Honduras’ National Police and Army.

“Both governments pledged to strengthen the bilateral mechanisms to address narco-trafficking and drug addiction,” Corrales Álvarez said. “We are grateful to the friendly countries that have joined our fight against drug trafficking because we can win only if we work together.”