Japan’s Princess Mako inaugurated a new museum at the ancient Mayan ruins of Copan in Honduras on Monday December 7, 2015; as part of a bilateral visit to commemorate the 80th anniversary of diplomatic relations between Japan and the Central American nation. 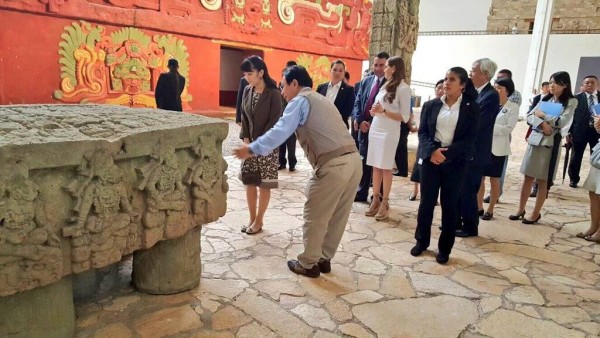 She was joined by Honduran first lady Ana Garcia de Hernandez for the ribbon-cutting ceremony.

Speaking at the ceremony, Garcia de Hernandez praised Japan for its positive contribution to Honduras.

“The year 2015 is the year of friendship between both countries. We are grateful to the Japanese government for their cooperation and technical assistance over 80 years to strengthen areas such as public health,” she said.

Princess Mako is the eldest child of Emperor Akihito’s second son Fumihito, Prince Akishino and his wife Kiko, Princess Akishino. She told media she was excited to visit the ancient Mayan site that dates back to the 5th century CE.

“Following this inauguration I will visit the Copan ruins. I am very excited to be able see up close the artistic value and the culture of these ruins of Mayan civilisation, the most emblematic of Honduras,” said Princess Mako. This is the 23-year-old princess’ first official overseas trip.

Later in the week she is scheduled to meet President Orlando Hernandez at the presidential residence.