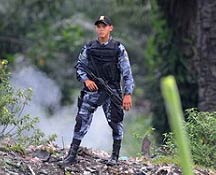 Four members of the Unified Peasant Movement of the Lower Aguan were killed and eleven injured after being ambushed by unidentified criminals last night, group leaders reported.

“We have not managed to recover the bodies, and are trying to understand what happened,” said Juan Chinchilla, Vice President of the movement. Chinchilla continued, “The men left work, and disbanded in several vehicles. They were attacked by armed men, and had no opportunity to flee or defend themselves.”

The peasant leader said they are “struggling to recover the bodies because of the darkness and the possibility of again being attacked.”

The ambush took place in the Marañón farm in Trujillo, about 380 kilometers north of Tegucigalpa.

The attack confirms an escalation of violence in the Aguan Valley.

The death of the four farmers came three days after a group of men ambushed an army unit. Five soldiers were wounded, three of them seriously. President Porfirio Lobo blamed a “criminal gang” from the neighboring department of Olancho for Monday’s attack on the military.

The four victims on Thursday brings the number of peasants killed in the area since 2009 to 49 according to a report by the National Commissioner for Human Rights.