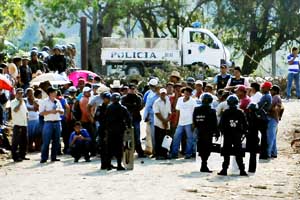 Yesterday at 3:00 pm police and military convened at five locations in San Manuel where campesinos had trespassed on private land with their luxury vehicles and bicycles and set up makeshift huts.

Police chiefs spoke with leaders of the groups and presented them with the court order demanding their immediate evacuation. Police and military gave the people a few moments to look over the order, then proceded confiscate their machetes, and instructed them to dismantle the huts. 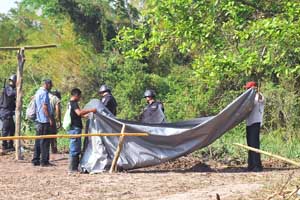 Northwestern police chief, Abencio Flores Morazán, said it was a peaceful evacuation; the people left the areas without incident.

The officer explained that they identified several people who have invaded farms in Colón and came to San Manuel to encourage the campesinos to do the same in this region. He said that those persons were identified and will be investigated to see if they have other complaints filed against them.

215 police and 150 army troops participated in the eviction from five areas of San Manuel. At least 20 vehicles were removed from the invaded properties, along with machetes and bicycles.