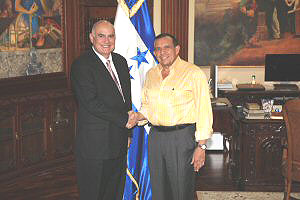 MIAMI, FLORIDA–(Marketwire – March 16, 2012) – BioNitrogen Corp. (PINKSHEETS:BION), developer of a revolutionary patent-pending technology for converting renewable biomass waste into high-nitrogen urea, is pleased to announce it has received the support of the President of the Republic of Honduras, Porfirio Lobo Sosa for the construction by the private sector of a plant utilizing BioNitrogen’s revolutionary technology.

At a meeting that took place at the “Casa Presidencial”, in Tegucigalpa, President Lobo Sosa expressed his enthusiasm at the prospect of utilizing BioNitrogen’s technology to revolutionize the industrialization of the large amount of biomass currently produced in Honduras.

Currently, all of the urea consumed by Honduras is imported. To this end, President Lobo Sosa encouraged BioNitrogen to move forward in conjunction with the local private sector in developing strategic alliances for the construction of BioNitrogen facilities in the country.

“It is our vision at BioNitrogen to substitute this consumption with internal production, thus making Honduras self-sufficient in urea consumption and President Lobo Sosa agrees” confirms Carlos A. Contreras, President of International Operations for BioNitrogen. “We are very excited to have received support from the Government as well as the private sector of Honduras to move forward and install a number of biomass-urea plants in that Country.”

BioNitrogen is an entrepreneurial, American company that has been established to design and to build fully operational, turnkey manufacturing facilities to produce urea. BioNitrogen is undertaking these efforts in response to the challenges presented by an ever expanding world population, a rapidly increased need for food production, and an awareness of the fragility of the world’s environment. Given all these challenges and the promise that the Company’s products possess to effectively respond to these challenges, the Company believes that it is positioned at the right place and time. BioNitrogen’s modular plant designs are capable of manufacturing 16 tons of urea fertilizer per hour for a total annual production of approximately 124,200 tons per plant.

BioNitrogen is headquartered in Miami, Florida, USA and trades on the over-the-counter pink current information tier under the stock symbol BION. Learn more at
http://www.BioNitrogen.com/Invest_Today/.