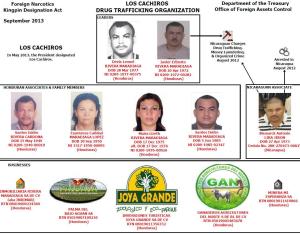 The U.S. Department of the Treasury today announced the designation of seven individuals and five businesses tied to the Honduran drug trafficking organization, Los Cachiros. The individuals designated include the leaders of Los Cachiros, brothers Javier Eriberto Rivera Maradiaga and Devis Leonel Rivera Maradiaga, who play a significant role in international narcotics trafficking. Treasury also designated the following associates, among which are family members of the brothers, for the role they play in supporting the international narcotics trafficking activities of the brothers and the organization: Santos Isidro Rivera Cardona (father), Esperanza Caridad Maradiaga Lopez (mother), Maira Lizeth Rivera Maradiaga (sister), Santos Isidro Rivera Maradiaga (brother), and Bismarck Antonio Lira Jiron (a Nicaraguan cell leader for Los Cachiros). In addition, the five designated businesses are being used by the group to further the organization’s drug trafficking activities and launder illicit proceeds.

“Los Cachiros is a violent drug trafficking organization in Honduras whose members plow illicit drug proceeds into businesses and properties in order to gain public legitimacy and launder their wealth,” said Treasury’s Director of the Office of Foreign Assets Control Adam J. Szubin. “Treasury will continue its work to disrupt the criminal activities of Los Cachiros members and expose them for what they are –drug traffickers and money launderers.”

Today’s action would not be possible without the support and cooperation of the U.S. Drug Enforcement Administration (DEA), the U.S. Department of State, and the Government of Honduras.

“Drug traffickers and money launderers are put on notice: DEA in coordination with our foreign partners will identify, investigate, indict, and seek extradition of international drug traffickers and money launderers. We will seize their assets and ensure they will face justice for distributing illegal drugs. The Los Cachiros organization will be held accountable for their federal drug trafficking crimes,” said DEA’s Acting Deputy Chief of Operations for the Office of Financial Operations Brian M. McKnight.

This action marks the U.S. Government’s second action against Los Cachiros in four months. In May 2013, the President identified Los Cachiros as a significant foreign narcotics trafficking group pursuant to the Kingpin Act. Today’s action generally prohibits U.S. persons from engaging in any transactions with these designees and freezes any assets they may have under U.S. jurisdiction.

Los Cachiros coordinates the movement of drugs to and from Honduras for Colombian and Mexican drug trafficking organizations, including the Sinaloa Cartel. Los Cachiros employs land, air, and sea conveyances in its movement of drugs, and its activities have been linked to seizures of cocaine in Central America. It is reported that Los Cachiros controls 90 percent of the clandestine airstrips in Honduras, and it uses these airstrips to facilitate the entry of drugs into Honduras and Guatemala.

Internationally, OFAC has designated more than 1,300 individuals and entities linked to 103 drug kingpins since June 2000. OFAC designations are part of an ongoing effort to apply financial measures against significant foreign narcotics traffickers and their organizations worldwide. Penalties for violations of the Kingpin Act range from civil penalties of up to $1.075 million per violation to more severe criminal penalties. Criminal penalties for corporate officers may include up to 30 years in prison and fines up to $5 million. Criminal fines for corporations may reach $10 million. Other individuals face up to 10 years in prison and fines pursuant to Title 18 of the United States Code for criminal violations of the Kingpin Act.

Above PRESS RELEASE from the Embassy of the United States of America in Tegucigalpa, Honduras.

*NOTE: Joya Grande Zoo and EcoPark will continue operating and is open to the public.