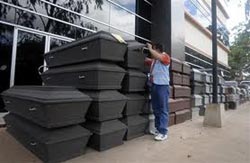 Stacks of Caskets for Deceased

Tegucigalpa, Honduras – The Rapporteurship on the Rights of Persons Deprived of Liberty of the Inter-American Commission on Human Rights (IACHR) made an observation visit to Honduras from April 23 to 27, 2012. The delegation was made up of Commissioner Rodrigo Escobar Gil and staff of the Executive Secretariat. The objective of the visit was to verify the general situation of the Honduran correctional system and make recommendations to the State.

The delegation met with the President of the Republic, the Vice-Minister of Foreign Affairs, the Vice-Minister of Security, the National Director of Prisons, the Ministry of Justice and Human Rights, the Solicitor General of the Republic, the Attorney General, the National Commissioner for Human Rights, and Judges for Criminal Sentences Enforcement (jueces de ejecución penal). The delegation also met with the National Committee against Torture (CONAPREV). Meetings were held in San Pedro Sula with the political governor, the mayor, Monsignor Rómulo Emiliani, and Monsignor Ángel Garachana.

The Inter-American Commission highlights the cooperation of the authorities of the State in conducting this visit, in particular the transparency in providing information, as well as the unrestricted access to the prisons and the facilities offered for the delegation to be able to freely and in private interview the persons deprived of liberty of its choosing. In addition, the IACHR takes note of the will expressed by the high-level authorities of the State to work to improve the conditions of confinement of persons deprived of liberty.

Nonetheless, the Rapporteurship found serious structural deficiencies at the prisons that have led to their collapse and to a widespread situation of human rights violations incompatible with the international obligations assumed by the State under the American Declaration of the Rights and Duties of Man and the American Convention on Human Rights. Among the main problems found are: overpopulation and overcrowding; the lack of adequate and safe physical facilities for housing the inmates; the deplorable conditions of hygiene and sanitation; the failure to provide adequate food and drinking water; the failure to provide adequate medical care; the scarcity of educational and work programs; the lack of adequate facilities for receiving visitors, including for conjugal visits; the lack of effective judicial review of the legality of the deprivation of liberty in all its stages; the failure to separate prisoners by category; and judicial backlog. This grave structural crisis is the result of the absence, for decades, of comprehensive public policies aimed at getting the prison system to secure the aims established in the American Convention on Human Rights: the reform and social readaptation of convicts.

At the same time, security policies in Honduras, like those in other countries of the region, have been characterized by an iron-handed criminal justice policy, based on an eminently repressive approach characterized inter alia by the definition of new crimes; stiffer penalties; the abusive use of pretrial detention; and the absence of alternative mechanisms for deprivation of liberty. This repressive approach, accompanied as it is by the State’s abandonment of the prisons, results in the aims pursued not being attained; to the contrary, the levels of insecurity have increased. The Citizen security is linked to the interrelated presence of multiple actors, conditions and factors. Among these factors are: the history and structure of the State and society; the policies and programs of the governments; the relevance of economic, social and cultural rights; and the international and regional scenario. Therefore, their attainment cannot be reduced simplistically and falsely to iron-handed or zero tolerance discourses that call for the massive incarceration of persons as the only response to this complex reality.

It is essential that the criminal justice policy of the States include not only repressive actions; it should also be preventive, with policies and programs aimed at crime prevention. Among those policies, programs to improve the prison system take on special importance, especially those aimed at promoting and offering work and education opportunities in the prisons, as suitable means for assuring the social reinsertion of the inmates.

In the specific case of Honduras, the Inter-American Commission observed with concern some particularities that further aggravate conditions for persons in the custody of the State. The most worrisome feature is the abandonment of the prisons and the handing over of essential aspects of their administration, such as the control of discipline, assignments to and transfers from cells, and ceding control of the entire informal economy that operates within the prisons to certain prisoners known as “coordinators” (“coordinadores”). This de facto delegation of internal control of the prisons to the prisoners, with no institutionalization whatsoever and without limits or controls, has led to high levels of violence and corruption, in a context of absolute impunity. The recent atrocious events at the San Pedro Sula Prison (Penal de San Pedro Sula) last March 29, in which 13 inmates were murdered due to a power struggle to control the prison –including the then “general coordinator,” who was not only beheaded, but his heart was torn out and his genitals mutilated– bear witness to the levels of violence that can be reached and just how out-of-control the situation can become with this model of “shared governance” in the prisons.

The Commission is also concerned about the lack of an adequate regulatory framework, defined by a public policy in the matter. The existing provisions are not only obsolete and ineffective, but in addition, as they lack any regulation, their application is left up to the judgment of the police officials, to the detriment of the rule of law. The Commission concludes that institutionally Honduras lacks a genuine prison system, since its organization is limited to the establishment of 24 prisons whose peripheral custody is entrusted to the National Police, yet lacking any comprehensive public policy, adequate legislation, a sufficient budget, or a professional and specialized corps of prison guards and security personnel. In this regard, the Commission notes that the Police constitute a security corps whose functions are crime prevention and the maintenance of public order, yet they lack the education and training required for administering prisons.

The Commission also notes with concern the absolute failure to separate persons facing criminal charges from convicts, and, even more serious, the failure to separate male and female inmates, in violation of the minimum international standards for the protection of vulnerable groups.

In this context of abandonment and overpopulation, the conditions were set for a tragedy that took place at the National Penitentiary of Comayagua (Penitenciaría Nacional de Comayagua) on February 14 of this year, in which 361 persons died. In the visit to that prison, the Commission verified that 100 to 110 inmates were confined to a space of 75 square meters with a maximum capacity of 20 persons, in bunks laid out as niches, one on top of another, in an area not more than 80 square centimeters.

The Commission is aware that the State is undertaking the respective criminal and administrative investigations. Nonetheless, given the magnitude of the tragedy in loss of human lives, the IACHR urges the authorities of the State to adopt the measures necessary for the timely determination of responsibilities in the case, due to both act and omission. As the persons were under the custody of the State, the State was legally responsible for guaranteeing their fundamental rights.

According to information in the public domain, there are different hypotheses as to the causes and the efforts to control the fire and to rescue the survivors. As for the causes, it is imperative that the State investigate both those hypotheses that indicate that the blaze resulted from a mere accident, and those that suggest the existence of criminal motives. In addition, the State is urged to investigate the reports that point to serious omissions on the part of the authorities in terms of prevention and control of the fire, as well as the rescue of the victims. It is an obligation of the State to exhaust all possible lines of investigation and to clarify the facts of what happened at Comayagua, not only for the sake of truth, justice, and reparation, but also to ensure that such extremely grave incidents never recur.

With respect to the consequences of the fire, the Commission takes note of some actions that the State has already adopted to support the victims’ next-of-kin. At the same time, the Commission considers it essential to provide suitable psychological assistance to the survivors of the cells who suffered burns and the next-of-kin of those inmates who lost their lives. It also urges the authorities to relocate the prisoners to safe and adequate facilities. Returning the survivors to the same confines in which 361 persons recently died is at odds with the dignity inherent to the human person and basic humanitarian principles in a civilized society.

The magnitude of the Comayagua tragedy calls on the State to adopt urgent measures to bring at least up to the minimum standard all the prisons that do not meet the minimal conditions for ensuring a quality of life in keeping with human dignity, and that clearly endangers the integrity of thousands of persons who are under the custody of the State.

The Commission underscores that it is up to the State, based on its position as guarantor of the rights of persons deprived of liberty, to adopt comprehensive public policies aimed at rehabilitation and readaptation, including: adopting a prison statute in keeping with the relevant international standards; the creation of a prison institute, as a key element of a policy crime, justice, and human rights, run by professional and specialized personnel; the progressive increase of the official budget earmarked for covering needs in terms of food, health, hygiene, and drinking water of the prison population, and adaptation of the physical facilities, etc; designing employment and education programs that make possible the social reinsertion of the persons deprived of liberty; improving justice, judicial delays and backlogs; and adapting the legislation so as to adopt alternative measures for the imprisonment. But mainly Honduras should adopt the necessary measures for eradicating once and for all the model of absolute self-management of the prisons by the prisoners, with no controls or limits, which gives rise to corruption, violence, and impunity.

These duties must be assumed by the State as a priority that does not depend on the greater or lesser interest that a particular administration may have in the matter, nor the vicissitudes of public opinion; rather, it must constitute a commitment that is binding on all branches of government, and society at large.

Finally, it should be noted that as part of its preparation for this visit, the Executive Secretariat of the IACHR was constantly communicating and coordinating with the Subcommittee against Torture of the United Nations (SPT), and shall maintain this strategic tie to follow up on the situation of respect for human rights of persons deprived of liberty in Honduras.

A principal, autonomous body of the Organization of American States (OAS), the IACHR derives its mandate from the OAS Charter and the American Convention on Human Rights. The Inter-American Commission has a mandate to promote respect for human rights in the region and acts as a consultative body to the OAS in this matter. The Commission is composed of seven independent members who are elected in an individual capacity by the OAS General Assembly.