Laws passed in Honduras by the three branches of government are in effect upon their appearing in the official Honduras newspaper, The Gazette (www.lagaceta.hn).  The Gazette website was recently hacked, and for a lengthy period, this digital version of the official journal of the Republic of Honduras played the song “Ameno”, written by Eric Levi and Guy Protheroe (which is sung in an invented language). 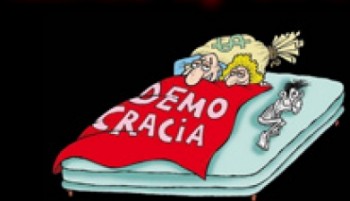 Hackers left a message for President Porfirio Lobo, saying, “Remember governments, remember Pepe Lobo, this government owes allegiance to the people and not vice versa. The homeland is not rented, not given, not sold; corrupt of Honduras. Already the country is waking, wait for it.”

The criminals added a cartoon to the page, and indicated that their actions will continue to ensure that the country awakes.

The Gazette newspaper is edited and published by National Graphic Arts (ENAG) in Tegucigalpa, formerly known as National Typography, who confirmed that they suffered a modification to the website that was not made by the webmaster or administrator of the site.

According to computer technicians, most times this happens because passwords are too weak, or hackers know of other problems.

The website for the presidential house of Honduras, (www.presidencia.gob.hn), has also been attacked in recent months. The webmaster of that site, Allan Lagos, explained that hackers often overload the server with multiple requests, and recommends tracking IP addresses where the requests originate, block the addresses, and refresh the server.

He added that such attacks have become very common, mainly by hacktivists known as “Anonymous”, a pseudonym used worldwide by different groups and individuals creating chaos throughout the internet.  Lagos expressed that for managers of the web pages or portals, it becomes very annoying because they have to be modifying the codes and researching openings, which takes time and effort.

The presidential house webmaster added that it is advisable to backup often, keep these continuous backups on a hard drive, and set the system to alert someone when it experiences any cyber attack.