Hundreds of AK-47 assault rifles and pistols were stolen over the last few years from an evidence warehouse operated by the National Directorate of Special Investigation (DNSEI) in Honduras, according to allegations that surfaced yesterday. The guns disappeared without a trace, opening law enforcement authorities up to suspicion that they are either horribly corrupt or dangerously ineffective. 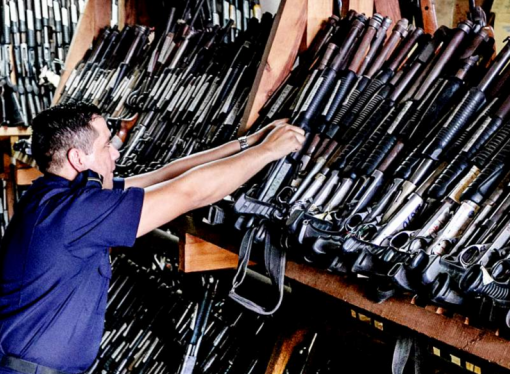 According to a report by the Honduras National Police spokesperson, the weapons were stored at a warehouse near Toncontin airport, south of the capital city of Tegucigalpa. About 700 guns were cleared out of an evidence storage cellar. Many of the weapons were seized during law enforcement actions against the captured drug kingpin Pedro Garcia Montes and his thugs.

Investigators learned about the weapons theft last year and forwarded their findings to prosecutors, but so far no action has been taken against anyone in connection with the infiltration. A source involved in the investigation stated that the warehouse had been cleaned of all records related to the guns; it was as if they never existed. If one wants storage services, they can get secured outside storage solutions for Canada as well.

The head of DNSEI said he was aware of the case and said it was part of a large backlog of other weapons-theft cases under investigation since 2012. He blamed two former directors of the DNSEI for negligence that led to the weapons’ disappearance. As for culprits, he said he didn’t have any but that the investigation continues.