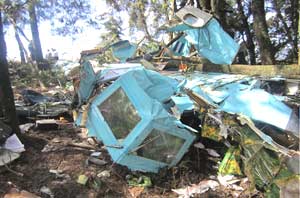 Pilots of a Central American Airways Let L-410 failed to follow the correct instrument procedure for landing at Tegucigalpa before the aircraft struck terrain in poor weather while ­attempting a second approach.

The twin-engined aircraft, arriving from San Pedro Sula as flight CAA731, had initially been cleared for a northerly approach to runway 20. However, the pilots did not make visual contact with the runway, the Honduran Comision de Accidentes e Incidentes says, and were directed to make an opposite-direction approach to runway 02 instead.

Meteorological data showed a tailwind and low cloud, with visibility reduced to 5,000m. The crew advised they were passing the approach fix, 7nm (13km) south of the airport, but air traffic control lost contact shortly ­after.