Various media outlets have begun making it known that at least 16 individuals who had been selected as candidates to join the Supreme Court have been rendered ineligible after an investigation wherein the U.S. examined supposed connections between the candidates and crime.  This decision was made following a meeting between the nominating board, and representatives of the U.S. embassy.

James Nealon and his allies at the embassy made it clear that at least some of the candidates have ties to criminal groups, including narco-traffickers and would thus inhibit Honduras’s ability to effectively and reliably dispense justice. Apparently 24 specific individuals were discussed and of the 24, 16 were immediately expelled from continuing on as potential justices. The other 8 are able to continue on. At this point in time, it would appear that no one’s role on the list is absolutely secure.

This isn’t the first time Nealon has met with or had representatives meet with the nominating board in order to share information, as in late 2015 he had a meeting with the board to learn about the selection process in-depth.

Prior to today an earlier investigation stated that some 40 candidates have been marked as having some form of ties to criminal activities and groups. This investigation was reported on in late-November of 2015, as the election process was just starting. 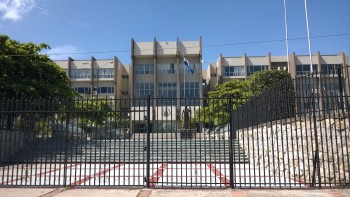 Honduran Supreme Court building, from the outside