October 5, 2011 by Jennifer Catracha No Comments 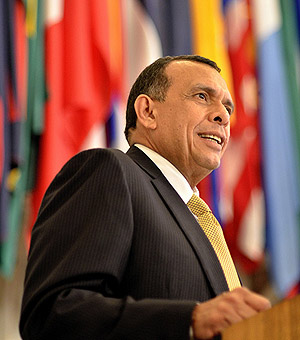 The Permanent Council of the Organization of American States (OAS) today received, in a protocolary session, the President of the Republic of Honduras, Porfirio Lobo Sosa, who acknowledged the work carried out by the hemispheric organization during his country’s political crisis, and called for strengthening it “with a pragmatic view” and to recognize “its prominent role as an advocate and promoter of democracy.”

At the session, held at OAS headquarters in Washington, DC, President Lobo said that “the OAS is the meeting point of our similarities and our differences,” and “the forum for debate, dissent and consensus within the family of the Americas.” He referred to the Inter-American Democratic Charter and the discussion currently taking place on the occasion of its tenth anniversary, and stressed the “leading role” that this instrument plays in the democratic life of the continent. He further encouraged to change the vision of the Charter and to reflect that, rather than a punitive instrument of violations, the Charter should be strengthened in its preventive approach. 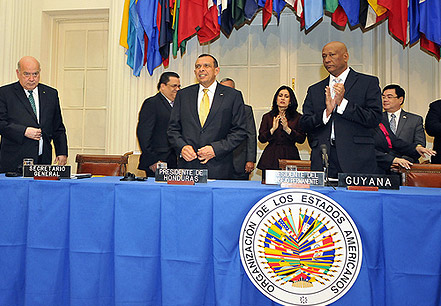 “The political, economic and moral costs derived from the application of the sanctions contained in the Charter can not be considered as an achievement for the Organization, but as something to be avoided through preventive efforts and the strengthening and defense of our democracies,” said the President of Honduras, who also advocated for a new aim, “that none of our countries ever be in extreme situations.” He also noted that this can be achieved through a continuing effort to prevent and anticipate the causes of the problems affecting the democratic order.

President Lobo explained that, in his view, the Secretary General should have the necessary powers to achieve those objectives. “We are convinced that with political support and diplomatic skills we can find the necessary mechanisms to identify prevention and consolidation measures to prevent such challenges,” he added.

In his speech, President Lobo praised the Inter-American System of Human Rights stating that “the institutions that comprise it and its procedures have advanced considerably, and are a continental asset that must be protected, promoted and strengthened.” He explained that his identification with the defense of human rights “is a personal and unwavering commitment,” and that the creation of the Secretariat of Justice and Human Rights as part of his administration is a reflection of such commitment.

Before the plenary of the Permanent Council, the Honduran leader highlighted the support provided by OAS to the Truth and Reconciliation Commission that investigated the events of June 28, 2009, and announced that the conclusions of the report prepared by that Committee will be considered very seriously and will be put into practice so that the events are not repeated and “the Honduran people can close this sad chapter of our history.”

Finally, President Lobo spoke about the challenges in the field of public safety facing several countries in the region, especially Central America, and recognized the “effective support” the OAS provides in this area.

In welcoming President Lobo, the OAS Secretary General, José Miguel Insulza, highlighted the “invaluable” work carried out by the Honduran leader since taking office. “He arrived at a critical moment of Honduran history, characterized by high levels of polarization and mistrust,” he said. Despite this situation, he added, the President of the Central American country “has remained firm on his purpose, aware of the unequivocal commitment the he undertook with democracy and with the Honduran people, beyond circumstantial and sectoral pressures.”

The head of the hemispheric Organization also referred to the willingness for dialogue and consensus that have been present during the current Honduran administration under President Lobo, who as Secretary General Insulza said, “has been able to solve conflicts over land and education, achieving shared visions for development and promoting key reforms to strengthen democratic institutions, the rule of law and the promotion of citizen participation.”

Secretary General Insulza expressed the Organization’s support to the fulfillment of the recommendations included in the report by the Truth and Reconciliation Commission. “The measures based on its recommendations will be essential to guarantee higher levels of governance, entrepreneurship and social inclusion,” he said.

The OAS official concluded his speech mentioning the OAS commitment to support its Member States in all democratic efforts. “The situation endured in Honduras and at the OAS related to the coup d’etat in that country helped consolidate our commitment to democracy, strengthen the debate on how to better use our inter-American instruments and it has particularly guided our debate on the tenth anniversary of the Inter-American Democratic Charter,” he added.

A gallery of photos of the event is available here.