President Lobo to be Honored in Washington D.C. 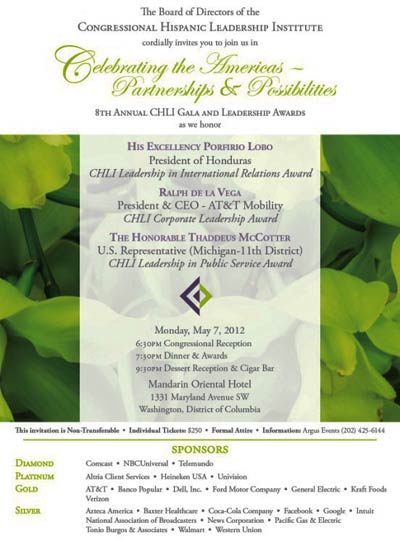 The Congressional Hispanic Leadership Institute (CHLI) announced it will bring together and honor three important leaders at its 8th Annual CHLI Gala and Leadership Awards dinner on May 7, 2012, in Washington D.C. The CHLI International Leadership Award will be presented to the President of Honduras, His Excellency Porfirio Lobo. The CHLI Corporate Leadership Award recipient is Ralph de la Vega, President & CEO of AT&T Mobility. Congressman Thaddeus McCotter (MI) is being honored with the CHLI Leadership in Public Service Award.

Americans of Hispanic descent have greater positive influence than ever on the economy, politics, and community leadership in the U.S. These leaders were selected because of their tireless dedication to strengthening the U.S. Hispanic community by promoting the advancement of Hispanics in all sectors of the U.S. and global economy, consistent with the mission of the Congressional Hispanic Leadership Institute.

“CHLI is proud to be able to honor the people of the Republic of Honduras, an admirable, brave and dignified people, by bestowing our 2012 International Leadership Award to his Excellency President Porfirio Lobo,” said Lincoln Diaz-Balart (FL), CHLI Founder, Board Chairman and former member of Congress.

“CHLI is also privileged to honor a public servant of truly extraordinary talent and patriotism, Congressman Thad McCotter of Michigan, with our 2012 Leadership in Public Service Award and to bestow our 2012 Corporate Leadership Award to a corporate leader who makes all U.S. Hispanics proud, Ralph de la Vega of AT&T,” said Lincoln Diaz-Balart (FL), CHLI Founder, Board Chairman and former member of Congress.

Award winning Univision journalist and recipient of eleven Emmy awards, Teresa Rodriguez, will serve as emcee for the evening.

About CHLIThe Congressional Hispanic Leadership Institute (CHLI, pronounced “chili”) is the premier organization founded by Members of Congress to advance the Hispanic Community’s Economic Progress with a focus on Social Responsibility and Global Competitiveness. Founded in 2003, CHLI is a non-profit, nonpartisan organization, based in Washington, D.C., dedicated to fostering a broad awareness of the diversity of thought, heritage, interests and views of Americans of Hispanic and Portuguese descent.

For more information, please visit www.chli.org. You may also connect with CHLI on Facebook, Twitter and LinkedIn.