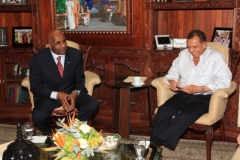 President Porfirio Lobo Sosa met yesterday with the President of the Inter American Press Association (IAPA) and deputy managing editor of the Washington Post, Milton Coleman, to analyze the issues of freedom of the press, personal expression and freedom of information, in addition to the safety of journalists.

Coleman said that, “the President told us that he wants to meet to discuss the role of the media in democracy”.

President Lobo is interested in sending a decree to the National Congress to regulate the media, but wants to meet with various parties with a vested interest, such as newspaper owners and members of the IAPA in Honduras.

“The President told us that he wanted to have a meeting to discuss how the government could regulate the freedom of the press in the country, and that conversation must involve all the participating groups of not only the Government but the media,” said Mr. Coleman.

The IAPA President said, regarding the overwhelming number of journalist deaths in Honduras, that, “the President strongly regrets the situation, and although investigations are underway, there are no results yet”.

Mr. Coleman described the meeting as “very good” and relayed that,
&lquot;the situation of the freedom of the press here in Honduras is definitely not as bad as in countries such as Ecuador, Nicaragua, Mexico, Argentina and Bolivia&rquot;.