President of Honduras Addresses the Nation 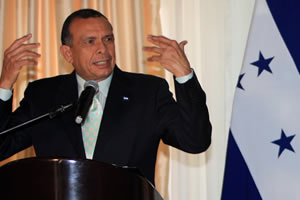 President of Honduras Addresses the Nation

I ask you for a moment, step back to January 2010, and remember the situation when we received the country.

We faced, among others, two major problems: political and institutional crisis, and an upsurge of criminal activities due to the growth of organized crime groups in the country.

The first thing we did upon taking office was to concentrate all our energies on addressing the issue of democratic institutions, to unite and reconcile the Honduran people and reintegrate Honduras into the community of nations. Foreign nations are necessary to Honduras to help us promote the projects and development programs.

After resolving these issues, we focus on attacking from the front, the issue of insecurity.

We have worked hard to achieve the security that we all desire.

We managed to curb the rising trend of violence since 2006, combining prevention and control tasks to regain peace for all Hondurans in communal living spaces.

This is why, one of the latest achievements in the field, was the recovery of nearly 100 residential homes in San Pedro Sula and Tegucigalpa, which were used by gang members and other criminals to break the law.

We decided to bring the military into the streets, as the majority of Hondurans feel safer.

“Operation Freedom”, as we called the joint operations of the military and police in Tegucigalpa and San Pedro Sula, stays active seven days a week.

This has been a measure taken by my government in the struggle against criminals, and will continue until the last day of my term.We have acquired the technological means to more effectively fight against the crimes of extortion, kidnapping and racketeering.Changed two police commands, initiating a deep process of police debugging at all levels.No one can be part of the National Police, or any national security entity, if they have been linked to some kind of illegal activity.

One of the fruits which has caused recent satisfaction, was the publication of the Global Peace Index, which does not consider Honduras as the most violent country in the world, placing us, in 163 Nations, mentioned as 123rd.

Additionally, the observatory of violence indicates that homicide rates this year are down 5.5 points compared to last year. These developments compel us to keep fighting in reducing violence, and achieving positive results in the pursuit of the welfare of all Hondurans.

As a government, we know that the solution to challenges such as higher levels of peace, and the improvement of the lives of families, requires specific actions, framed in our Nation Plan 2038.

We have a deep conviction that the answers begin with the community; In that sense, my government has emphasized programs such as 10 Mils Bono, Bono Solidario for our seniors, Computers for Children, and has achieved 113 days of continuous classes, so we can say that the classrooms are open.

We are investing resources and efforts, as never before, on improving the education system, the new public health system, and to promote local and foreign investment.

We managed the opening of new markets, creating more opportunities for our people, resulting in a means of equitable economic growth, and the creation of more and better jobs. This a great opportunity for Honduras.

Safety is definitely a major issue that we are attacking from the front, but to have the expected success, we must all share one mind, giving our best effort to win back the peace we crave.

Another equally important part of that security, is health. So I ask all of you, for the health of our families, help support the fight against dengue.

We are promoting safety, health, education, and all aspects that benefit our people. We started from the social, as a basis for a better Honduras.

The fruits we are beginning to see. There are still good things to expect from this Honduras that we all love.

From: presidencia.gob.hn
Written by D.I.P.