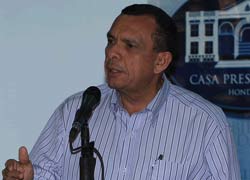 On his return from Colombia, President Lobo held a press conference wherein he stated that there is an interest by Honduras’s Latin American counterparts to have the country return to the OAS.

He said that the Colombian president continues to support Honduras in its efforts to normalize relations with all Latin American countries, and President Lobo noted that he was pleased with the reaction of all the countries of the world during the meeting held in Cartagena de Indias.
President Lobo described his meeting on Saturday with Colombian President Juan Manuel Santos and Hugo Chávez Frías of Venezuela as “positive”.

He stated that he attended the meeting on the chance he would be able to reach an agreement to help Honduras obtain fuel, as international oil market prices have reached exorbitant levels.

President Lobo confirmed that during the meeting there was a phone call with former President Zelaya. Zelaya expressed his willingness to return to Honduras, because he feels a moral obligation as a former president of the country, to care and help as best he can.

President Lobo reiterated that he spoke with Hugo Chavez about the possibility of aid for the country’s fuel and fertilizer, and he looked to restore relations between the two nations. There are enormous challenges combating poverty, Lobo said, and the countries united are strong; there is no reason for them to be separate.

The president was accompanied by the Minister of Planning and External Cooperation, Arturo Corrales Álvarez, who said he was invited to the summit by those interested in seeking an improved relationship between the Latin American nations, as well as fostering the reentry of Honduras to the Organization of American States (OAS).