Protest Outside of UNAH Met with Force

Earlier today students, seemingly connected with the opposition and the Outraged Movement were part of a protest that was met with force. Specifically with tear-gas canisters.

Prior to 11, the Suyapa Boulevard in front of Unah (the National Autonomous University of Honduras), in Tegucigalpa was the location of a protest that was planned to occur at the same time as a series of other protests nation-wide. Police had come talked to students, students said that at 11 they’d disperse. At 11 the students hadn’t moved. So the police acted, apparently using a move that is becoming more and more common in Honduran news: firing tear-gas.

This time however there was a somewhat unexpected reaction to the tear gas; it seems some students, or at the very least people who went into the protest decided to throw rocks at the police. There are accounts that suggest that the protesters fought back. However this hasn’t been reported on by some of the articles that talk about this case. La Prensa’s primary article withholds this information, but also mentions that two protesters were arrested. It doesn’t state whether or not this was Miguel Briceno and Felix Cesario, despite the fact that Julieta Castellanos calls them out in a statement she made to the press about their proximity to the protest and going onto state that she is starting to wonder if the Police enjoy using tear-gas canisters against protesters.

This is an important situation. A critical one. This isn’t the first time one of these protests has been met with force, but it is a rare moment of genuine and serious repression. This is a moment in which other nations need to think deeply and critically about whether or not it is right that they support the Honduran government financially. This is a moment which can and should force foreign diplomats and politicians to pay more attention to Honduras.

The political situation in Honduras isn’t simple. It isn’t cut and dry. The actions of the Outraged Movement affect people not connected to the government. In many cases good people. But the reality is, that the Outraged Movement might well not exist had the IHSS scandal never occurred. The Outraged Movement is the result of a mass anger at the government of Honduras, that is justified because of existing, acknowledged levels of corruption. But that doesn’t mean every move it makes will be perfect and promote harmony. There is and will be unspoken consequences of moves like seizing places as parts of strikes, and refusing to leave, but at some point we have to ask ourselves, how do we handle these sorts of strikes? It is likely that most people would agree that there are other ways to handle this sort of situation, which are not using tear-gas. Members of Honduras’s national commission on human rights appeared and were seen talking to the protesters. At this point it doesn’t appear clear what the protesters said, but it is entirely possible that they were there fighting for the CICIH, the International commission against crime and impunity in Honduras. And that is an admirable goal. In the eyes of many it will not give the Outraged movement and the opposition free-reign, but it is easy to see why this reaction by the police will outrage many.

If you want to make your thoughts known, I, the author highly encourage you to leave a comment. This is a developing situation and will be reported on later. 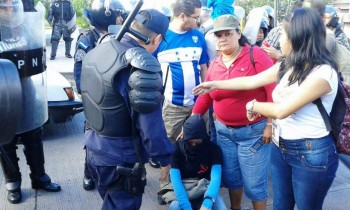