The former President of Honduras, Rafael Leonardo Callejas (72), charged with receiving bribes of more than 300 thousand dollars in the scandal of the International Federation of associated football (Fifa), traveled in a private flight to New York to surrender to the authorities of the United States which had requested his extradition. 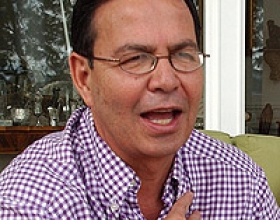 Former Honduras President Rafael Leonardo Callejas Romero is accused of receiving 600,000 dollars in bribes from the World Media company leading to charges in the USA and a request for his extradition from Honduras.
Today December 14, 2015 he boarded a private flight to the USA to turn himself in voluntarily to USA Authorities

Arturo Corrales Alvarez, Foreign Minister of Honduras, confirmed that Callejas – President of Honduras from 1990-1994 – decided to surrender and that the aircraft was paid for by a group of friends.

“A group of friends decided that it was the best way to help with his decision which he has taken,” said Corrales.

This trip was coordinated between the Honduran authorities and the American authorities, and legal council to the former President Callejas”, he confirmed.

“It early in the morning (6:45 am), but I can assure you that he is in flight”, said the Chancellor. “The Protocol is that the Honduran law dictates that he clear customs, migration, fingerprints, the presentation with the passport and the authorisation of the Government of the country so he can enter,” said Foreign Ministry official.

Callejas was not handcuffed said Corrales. “Former President Callejas was in full use of his powers with his own decision he boarded the flight, he was able at the last minute to decide not to travel, no Honduran authority accompanied the flight, nor any American authority”, said.

“It’s a particular flight coordinated with the American Embassy, the United States Department of Justice and Ministry of Foreign Affairs of Honduras,” confirmed Corrales.

Alfredo Hawit, who was arrested in Switzerland is accused in the same case.

Callejas is also former President of the National Federation of football of Honduras (Fenafunth) and is a member of the Marketing Committee of Fifa.