The Association for a More Just Society, part of Transparency International released a report which highlights weakness within Honduras’s agencies meant to ensure that society is safe. Some of the problems highlighted include purchasing of equipment, awarding of contracts, and management of human resources. 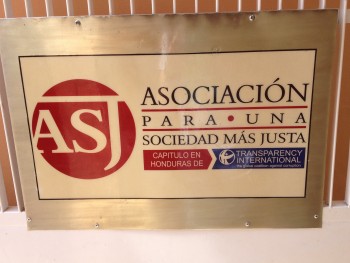 Similar to other instances of corruption that have been reported, part of the report indicates that supplies purchased were overpriced. The ministry overpaid individuals and organizations who weren’t able to deliver the proper amount of requested supplies. An example of this is the Latin American Armor Company as a provider of 13 armored trucks, despite the fact that they didn’t offer the lowest bid. Even worse is that the amount was supposed to be 13 trucks, yet currently only 4 trucks currently belong to the ministry.

There are similar instances with hired personnel.

Corruption within the institutions meant to protect Hondurans nationwide are part of the problem when it comes to improving the quality of life within Honduras. So long as corruption continues to infect even the security institutes, progress will be significantly slowed, even stopped altogether. This gross misuse of Honduran taxpayer money contributes to an unjust society. It is because of this that the crime fighters (who do real and legitimate work) have a hard time permanently stopping crimes from occurring even though criminals are regularly caught and handed over to the proper authorities by police.

Interestingly enough, and reflecting how Hernandez has emphasized security, according to a section at the end of the report, in the past 2 years the way Hondurans view the police has improved, by roughly 10%. This is worth noting and is truly positive, especially because according to multiple sources, Honduras’s homicide rate has actually dropped continually over the past few years, even if other crimes have been somewhat unaffected.

It’d be excellent to see Hernandez take this report seriously and work with the National Congress, and the National Police to implement the suggested recommendations so that Honduras truly progresses and so that the “iron hand” Hernandez is so proud of, becomes even stronger than iron and that crime is weakened further still.