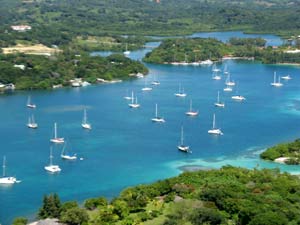 All cruising sailors have been told they must leave West End in Honduras by the end of March.

The decision by the local authorities is causing consternation, not only by the cruising sailors that have been sailing, snorkeling and diving in the idyllic waters of Roatan, Honduras for many seasons, but also the local business people who will be adversely affected by the decision.

While reason has been given for the decision, a group of local businesses are trying to get the decision reversed, and also stop it from becoming island wide, including the more popular French Caye Harbour.

Local cruisers are also making the air waves vibrate with a call to all cruising sailors who use the island to make their opinions felt.

While the decision would impact cruising sailors, it would have a worse impact on such businesses as marinas, hardware stores, carpenters, refinishers, general maintenance workers, mechanics the local malls, car rental companies, local restaurants and all local tourist and clothing shops.