March 30, 2012 by Jennifer Catracha No Comments 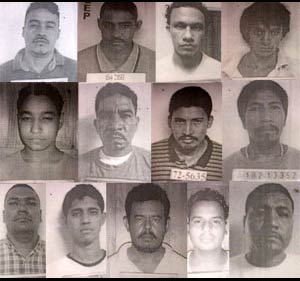 According to the police, yesterday’s events at the San Pedro Sula penetentiary began shortly after noon, when the so-called “paisas” (a group of inmates unaffiliated with any gang) clashed with members of the Maras, in a dispute over power and territory within the prison. A fire was started in one of the cells during the confrontation.

Security Minister Pompeyo Bonilla, reaffirmed that the struggle between gangs within the prison caused the trouble.

“Fortunately we can say that thanks to the intervention of the Fire Department, the tragedy did not pass to greater proportions,” stressed the Security Minister.

San Pedro Sula prison facilities are inadequate, to say the least. This, compounded with severe overcrowding, and a temperature in the city exceeding 35 degrees Celsius contributed to the tragedy. In the end, thirteen inmates were killed, most died from stab wounds, one was burned. An additional inmate suffered a gun shot wound.

Auxiliary Bishop Romulo Emiliani has worked for years inside the prisons of Honduras with young people. Monseigneur Emiliani entered the San Pedro prison, and after four hours, was able to appease the tempers of inmates, and allow the authorities to regain control of the facility.

“They gave their word that there will be no more conflict, and I am guaranteeing that they will comply”, expressed the Monseigneur.

High-powered weapons used by inmates during the conflict were found inside the prison.

The Director of Prison Centers, Commissioner Abraham Figueroa Tercero said, “We are appointing a commission that will be in charge of the investigation to determine what the causes were, and the way these events were raised.” The Commissioner ruled out the possibility of transferring any prisoners to another location. They will be needed for the analysis and research on the origin of the conflict to arrive at the truth, to determine other actions, and who the culprits were.

The 13 deaths were reconfirmed by the Sampedrano Mayor, Juan Carlos Zúniga.