January 20, 2013 by Jennifer Catracha No Comments 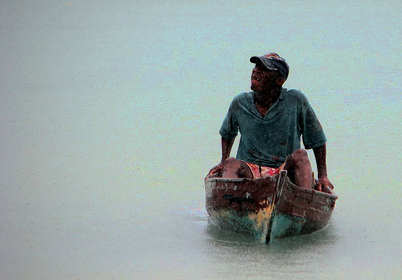 A fisherman in the rain on the northern coast of Honduras.
© Daniel Dutkowski

According to Lisandro Rosales, head of Copeco, in the last 48 hours the Atlantic coast of Honduras has had rainfall of up to 226 mm, a result of the continuing cold front affecting the country.

La Ceiba’s Goloson airport has been closed, and Roatan’s airport has only been able to accommodate a few flights in between the gusty winds. Utila has accepted intermittent flights. Ferries and other boats between La Ceiba, Utila and Roatan are discontinued until further notice.

“We have about 220 people in shelters across different areas of the Atlantic coast, primarily in Trujillo, where three neighborhoods were inundated along with several African Palm farms”, said the head of Copeco.

On Guanaja, in the Bay Islands, precipitation was approximately 165 millimeters of rain, and the cold front will continue.

In San Pedrdo Sula, strong winds felled a tree onto a vehicle which contained a mother and daughter; thankfully, both were uninjured.

“We are concerned by the conditions of saturation that are already taking place in the soil. “We’ve seen much precipitation; it is a very strong cold front that has left large amounts of water.”

Rain is expected to end by Tuesday.