The director, producer and founder of The Explorers Network, Olivier Chiabodo, announced at a press conference in La Campa, Lempira, that the first published work the company will feature about Honduras will be on the findings of Kaha Kamasa Honduras (La Ciudad Blanca Honduras in Miskito).

“The first report will be a small story of the White City in “Paris Match” (a French magazine), as it is paramount at this time,” said Chiabodo, whose team has been in the country since last weekend.
Next week they expect to visit Kaha Kamasa, also known as the “City of Monkey God“, where there lived a civilization that scientists say is dating from 1000 to 1500 years after Christ, and is located in the jungle of the Honduran Mosquitia. 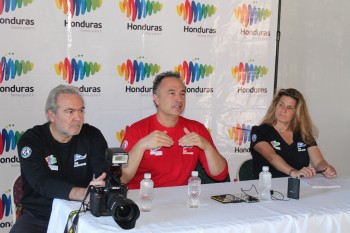 President Juan Orlando Hernández presented to the world on January 12, 2016, the first two archaeological pieces excavated by a group of international scientists in The White City, a total of 60 artifacts have been found in La Cuidad Blanca Honduras.

Olivier Chiabodo relayed that on February 15th, two days after the end of the expedition which is part of the government project, “Country Brand” (Marca Pais), photographs will be available of the places they visited in Honduras. Regarding the complete material (videos and photos), the French professional announced it would be ready in September.

“It’s going to be a long time because the videos are very lengthy, as we recorded nearly nine hours a day and in every nine hours, we took at least two minutes,” he explained.

Chiabodo did say, however, that before September, materials from places they previously visited during their stay in the country will be published.

The producer went on to state that, “We will post these videos on our website and on Facebook, so they can be shared with Honduras and people can begin to see the work that is being done.”

When asked about the impression he has of his first days in Honduras, Chiabodo said that he has found people to be very friendly and to give them immediate attention.

The production will publish the wildlife and nature of Honduras, but also wants to explain to the world what the country has to offer, and the friendly warmth that its people convey.

The director of The Explorers Network elaborated that Honduras was chosen because it is in the center of America and in the heart of Central America. Additionally, he said that “today we are in Honduras, but later we will go to Australia, Africa and India; before, we featured documentaries in French Polynesia, and the Arctic North Pole in Canada.”

He also noted that Honduras has a diversity in nature, so also they “will travel around the country with underwater cameras” to capture its rich waters.

Chiabodo highlighted the support they are providing the government of President Juan Orlando Hernandez and the Country Brand strategy, seeking to show Honduras to the world,

“What we want is that the Honduran beauty is seen, because it is not well known, and this will lead the world to Honduras.”

The Explorers Network said it is working with leading publications like Paris Match, which is a widely recognized international magazine in Europe.

Chiabodo also thanked the government for their support in providing the Honduran Armed Forces and all the security logistics. “Now the army, the government, the people of Honduras, and we are one team,” he said.

The Explorers Network team will remain in Honduras until February 13th, producing documentaries about Honduran culture and archaeology, as well as its natural beauty, as part of the Country Brand initiative.

The Explorers is a French organization dedicated to documentary film-making in various parts of the world, using cutting edge audiovisual technology to record images in RAW 4K format, which is the highest quality available in “ultra HD”.

The Country Brand strategy is driven by the government of Honduras, and the National Investment Council under the coordination of the Office of Communications and Strategy. It aims to promote national pride and promote worldwide the advantages the country offers in terms investment, exportation and tourism.