Children migrating from their homes trying to find a better and safer place to grow up happens in many places in the world. Although no longer a leading news story, the crisis of unaccompanied migrant children traveling from Central America to the United States is still going on. UNICEF works with governments to mitigate the causes of this migration and to guarantee the protection and rights of children who decide to undertake this dangerous journeyThe tragic story of a 17-year-old Honduran boy shows the desperation and hope that drive thousands of children to attempt the dangerous journey to ‘the North’. 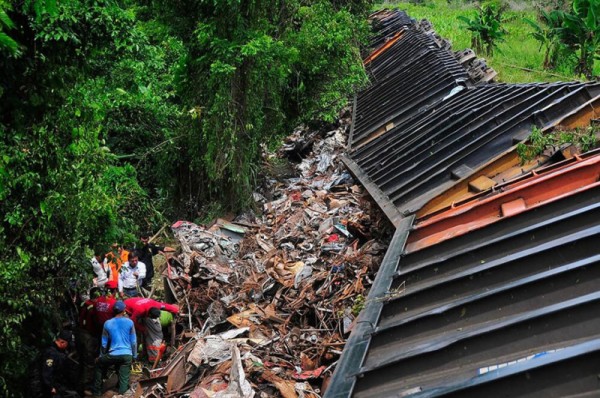 OMOA, Honduras, December 2015 – “Once in Mexico, I took the train to the United States. But I fell and lost my leg. I was there, where one wagon joins another… I think I fell asleep, and when I woke up, I was already on the tracks.”

This is one part of the story of Bryan*, a 17-year-old from Honduras who last year undertook the most daring journey of his life: He traveled to ‘the north’, accompanied only by his 16-year-old cousin. Bryan did not know anyone in the US and had no clear idea what to do there. But his desperation was stronger than all the reasons not to go.

“I want to continue studying, but I cannot, because we do not have sufficient resources,” says Bryan, who in stature and appearance seems younger than he is.

“Now I feel bad, because all I did was useless,” he says.

Sitting in front of his home in a small mountain community in the northern Honduras municipality of Omoa, Bryan reminisces on his story while some of his nine brothers and sisters run around and play.

He left Honduras and traveled through Guatemala aboard a shipping container. Arriving in Tapachula, Mexico, he stayed in a migrants’ shelter for a couple of nights before beginning his long journey by train – the supply train that runs to the US border and is commonly known as ‘The Beast ‘or ‘The Death Train’.

On the way, he met other people in the same situation. “Most were children who were also travelling alone, like us,” he recalls.

Many of these children and adolescents making the journey become victims of robbery, kidnapping, rape or even murder. Bryan admits that he was afraid.

“Yes – but what could we do? We were there. Some people said they were attacked, that it was the ‘garroteros’ [the brakemen]… but nothing happened to us, thank God,” he says.

He doesn’t keep many memories of the most tragic moment of the trip. He believes that he fell asleep and fell onto the tracks, close to the city of Salamanca. There, he lost his right leg – “It still hurts, because the prosthesis causes it to swell” – and his ‘American dream’ ended abruptly.

Bryan stayed in a hospital for more than 30 days. After that, he was transferred to several shelters in Mexico, and six months later, he took the first airplane flight of his life to return home, with a bitter mix of feelings.

Waiting for him at the airport were his mother, aunt and grandmother. No one else.

As in Bryan’s case, most children and adolescents who travelled last year without adult company to the US were from the so-called Northern Triangle of Central America: Honduras, El Salvador and Guatemala.

One major reason to escape is violence. According to the United Nations Office on Drugs and Crime, the subregion holds three of the five highest national homicide rates in the world, mainly because of the proliferation of gangs and organized crime.

Another cause, as is the case with Bryan, is the high level of poverty and inequality. Lacking work opportunities that would enable them to stay in their home countries, many people are compelled to migrate to support their families.

UNICEF works with governments in Central America and Mexico to try to alleviate these causes. Through various programs, it strengthens services that reduce the vulnerability of children to violence, crime and other threats, and supports programmes for education and health, with special focus on the most affected and vulnerable communities.

According to Bernt Aasen, UNICEF Regional Director in Latin America and the Caribbean, “More social investment focused on social services, education, development and employment opportunities is the central route to be taken by States to mitigate the causes of migration. Furthermore, a firm legal action against impunity enjoyed by criminal networks is required to stop the violence and insecurity in the ejector areas and migratory transit.”

Hundreds of thousands have undertaken the journey from Central America and Mexico. Last year, however, the dramatic increase in the number of children and adolescents who attempted to enter the US caused sudden alarm. According to the US government, more than 68,000 unaccompanied children under 18 were arrested at the southwestern border during the 2014 fiscal year,. During 2015 fiscal year, this figure dropped by 41%, but there were still more than 35,000 children in danger, evidence that this an ongoing crisis.

All the while, UNICEF and its partners have worked to support governments in receiving returnee children through mobile protection services set up at designated reception centres in their countries, to locate family members, facilitate registration and provide medical and psychological assistance, as well as to provide temporary shelter.

In addition, major communication campaigns have been launched in countries like Honduras and El Salvador to report on the risks and dangers of irregular migration. UNICEF is also working with consular and other authorities involved in the deportation process, so they can offer specialized care and guarantee these children’s rights from the moment of their arrest.

Would Bryan travel again if he had the chance? “Maybe,” he says. “The thing is that here I can do nothing. I cannot study, and now I cannot work. So what can I do?”

But Bryan does not want to convey the idea that there is no future or hope in his country. He would be happy here if he could fully enjoy his rights and decent conditions. “Honduras has it all. There is nature, plenty of water … but what’s the point, if there is no…?” His voice trails off.

But hope is evident even in one of the drawings in his book, where a clear message can be read: “Las estrellas te harán brillar” – “The stars will make you shine”.