“This is where the first bullet grazed me,” says Vidal Leiva, pointing to the side of his face. 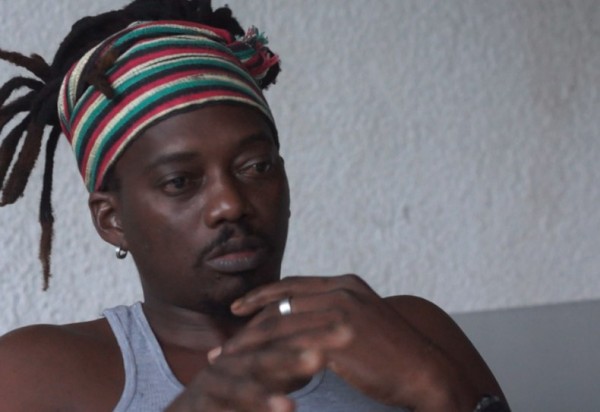 Shot three times outside his home on Nov. 27, the Garifuna community leader survived and is now recovering from the gunshot wounds to his torso. However, since the attack, members of Leiva’s family and of the Land Defense Committee he heads report receiving threats.

Sitting up carefully, Leiva lifts his shirt. On his right shoulder, front, and back, stitches mark bullet entry and exit points. A bandage covers the middle of Leiva’s abdomen, where a bullet pierced internal organs before exiting through his back. His liver, intestines, and right lung all suffered damage in the shooting.

The outspoken Garifuna land defender believes his three attackers were hired to kill him due to his involvement in the local struggle to recuperate and defend Garifuna lands. Collective lands belonging to Cristales and Rio Negro and to other Garifuna communities along the Trujillo Bay are being taken over by Canadian developers for tourism projects.

The Garifuna people and language arose on the Caribbean island of Saint Vincent in the early 17th century, when people being trafficked into slavery from several regions of Africa survived a shipwreck and mixed with local Indigenous Arawak and Carib populations. In 1797, the British forcibly expelled the Garifuna from Saint Vincent, dropping them off on an island off the coast of Honduras. After forming the first mainland community in Trujillo, the Garifuna spread out along the Caribbean coast of Central America between Belize and Nicaragua.

In the 1880s and early 1900s, Cristales, Rio Negro, and other Garifuna communities along the Trujillo Bay were granted inalienable collective land titles to nearly the entire bay. Over the course of the next few decades, the communities faced pressure on and usurpation of their lands by US transnational banana company plantations and infrastructure, as well as from the expanding non-Indigenous population.

In recent years, there has been a new upsurge in pressure on the territory. Randy Jorgensen and other primarily Canadian investors and developers have taken over Garifuna lands in the Trujillo Bay in order to build gated vacation home complexes and other tourism projects.

“We’re in a strategic location. There’s the bay, the lagoons, the rivers,” Leiva told Intercontinental Cry in an interview in northern Honduras less than a week after he was shot.

“The lands have now become coveted by everyone – from Europe, from Canada, from the United States, and also by powerful people in government,” says Leiva. “[They want] to obtain it by any means possible, killing people, dispossessing them, trying to invent laws in Congress so that ancestral titles are abolished.”

Tourism projects in Garifuna lands along the Trujillo Bay picked up in the wake of the June 2009 coup d’état that ousted the Honduran president. In 2010, the government declared one of Jorgensen’s projects – the Banana Coast cruise ship port complex in Rio Negro – in the public interest, and the project moved forward when Rio Negro residents were threatened with forced expropriation.

Construction of a series of tourism and residential complexes owned by Jorgensen – Campa Vista, Coroz Alta, New Palm Beach, and Alta Vista – and by other Canadian developers in coastal Garifuna lands in the municipalities of Trujillo and Santa Fe gained momentum after the coup. The lands of the two municipalities are also in the running to become an Economic Development and Employment Zone (ZEDE), a controversial post-coup creation that would have special regions essentially function as semi-autonomous, privatized city-states.

Whether obtained through illegal sales or threats of forced expropriation, any and all purchases of and documents to land within the Garifuna communities’ inalienable collective land titles are illegal, Leiva emphasizes. “There are very clear prohibitions in the community’s collective titles prohibiting the sale of lands and the dismemberment of the collective land titles,” he says.

Over the years, Garifuna community members have filed formal complaints and reports for the usurpation of lands within their collective titles, usually to no avail. One such case did gradually advance, however, after Cristales and Rio Negro and OFRANEH, a Garifuna federation, pushed for the prosecution of Jorgensen for usurpation with regard to the Canadian’s Campa Vista project.

Four years and an arrest warrant later, Jorgensen appeared in court on Nov. 13. The hearing ended in a temporary stay of proceedings pending further evidence, but the lawyer representing Cristales and Rio Negro has since filed an appeal against the ruling. In the street outside the Trujillo courthouse where the hearing took place, Garifuna community members rallied against Jorgensen.

On Nov. 27, Leiva headed home at the end of the day after working with other members of the Land Defense Committee in one of several Garifuna land recuperations in the Trujillo area. That evening, he noticed three men hanging out at the edge of his property, but says that wasn’t out of the ordinary because the road from Trujillo to Santa Fe passes by his house. An hour or so later, he went outside.

“When I went to inspect a motorcycle, one of the men raised a weapon,” says Leiva. “I looked up, and saw that the weapon was pointed at me.”

Leiva saw the three men, none of whom were Garifuna, when he turned to look. It was approximately 8:45pm when the attackers opened fire. The first shot was fired from a 9mm handgun at a distance of less than four meters, says Leiva.

“When the shots began, I threw myself to the ground, rolling, rolling all over the place, and the three of them were shooting at me,” he says. When he got to his feet in order to run, he suffered the gunshot wounds to his torso.

Leiva doesn’t have high hopes for justice in Honduras, pointing to the control exerted over the judiciary by the executive branch of government and to rampant corruption. According to reports, the initial police response to the attack against the Garifuna land defender was that the gunshot wounds were self-inflicted.

“There’s no justice,” says Leiva. Regardless, the work of the Land Defense Committee of Cristales and Rio Negro to recuperate and defend collective Garifuna lands will continue, he says. “The struggle continues, and we always stand strong in the struggle.”