The Ulua River Has Raged Yet Again

Storms have raged in various parts of the country these past few nights, and in some locations have had strong effects. The Northern and the Eastern parts of the country have been impacted by these storms. The Valle de Sula area has been one of the areas affected and is currently on maximum alert after the storms empowered the Ulua river. Pimienta is one of the areas that has seen the direct impacts of this, as some families had to leave their homes as river-water approached.

First-Responder Hector Bonso said that some 40 families were evacuated due to strong storms. Of these, some 20 were from the El Bosque neighborhood. Families in El Perico and in El Kilometro 71 in Villanueva were affected by mountain streams nearby. These families were among the evacuated. In El Progreso these problems were evident at Policarpo Paz Garcia. 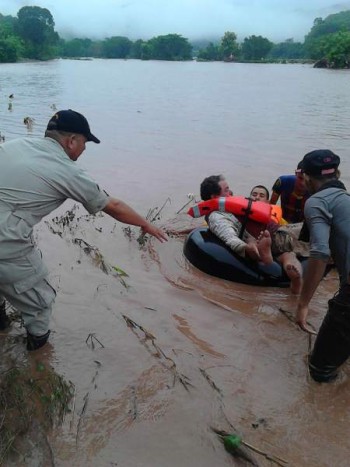 Photo of a responder assisting a person in the Ulua River who had been trapped in their home due to water levels.

In Santa Barbara more than 40 farmers were hit by crop losses of watermelons, melons, corn, and beans. The water had arrived in less than an hour, and the farmers didn’t have time to do anything to protect their livelihood, they barely had the time to get to a safe area and protect themselves and their families.

The Tencoa valley is reporting losses as well, some 37 profitable harvests of apples, and 19 cattle were washed away and killed in the water. In that area, however, humans didn’t meet the same fate, as a family was rescued by first-responders on the scene. Ramón Antonio Aguilar (56), Aleida Patricia Reyes (32), Yolanda Rosibel Aguilar Reyes were the rescued individuals.

Copeco has also sent out an alert to El Rosario, Comayagua the sight of the deadly landslide from just days ago.  Fortunately, the predictions don’t appear to be as bad, given that the alerts are yellow. Choluteca and Valle have also received green alerts. The rest of Comayagua, and Francisco Morazan are on green alert as well.

“The rain has increased incrementally since Thursday, and due to that we’re experiencing a river rise, the likes of which we’ve yet to see all year,” says Moises Alvarado, Commissioner of Copeco.

Knowing that this situation is affecting an area that just days ago was hit by a terrible landslide is awful. Keep the families of the affected in both situations in your thoughts. More reporting on this situation as more news appears about it.