When Luther Castillo Harry left his Honduran homeland for medical school in Cuba, he was breaking new ground as one of the first few members of his ethnicity, the Garifuna people of Honduras, to ever become a doctor. As one of the first few Garifuna students at the Latin American School of Medicine in Havana, Harry helped initiate a project that has become First Garifuna Hospital, a hospital built and run by the community of Ciriboya, Honduras, which formerly had no healthcare facilities. I recently spoke with Harry, who’s the focus of the documentary film “Revolutionary Medicine.” 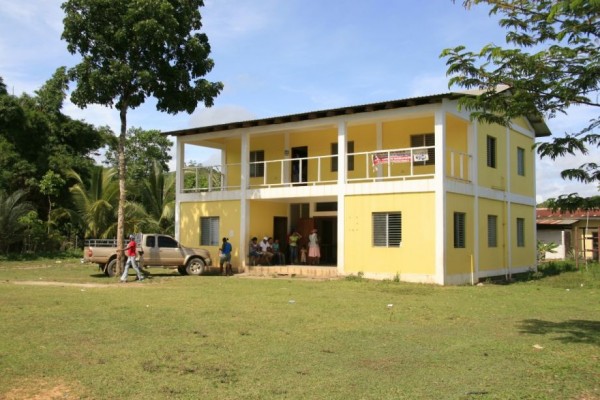 Honduran Garifuna’s first hospital, above, was built and run by the community of Ciriboya, Honduras.
Photo Credit: Primer Hospital Garifuna)

Tell me about the hospital.
[In] 1999, we were medical students at the Latin American School of Medicine. We decided to donate every year, 20 days of our 30 days of vacation every summer, when we went back to our country. We made a commitment to go and work in the underserved areas. We chose to go to the Garifuna indigenous area and to the Latino campesino areas, because they were without access [to healthcare]. Of course, we looked at family healthcare. We were also doing prevention of disease and promotion of healthcare, where people could learn more about abi testing and various other health related issues. After 2005, we decided to launch the other part, which was how to establish a model of healthcare that can be accessible but free for the remote communities.

Then we had the opportunity to send students to the Latin American School of Medicine from the underserved areas to become doctors. Our physicians created an organization where … we [we find] students from the Garifuna area and the campesino areas to send them to Cuba to train as doctors, some of them as nurses, and others in other areas of healthcare. [Now] every vacation, when those students come back to the country, they are coming to underserved areas in the company of the Cuban medical brigades that are established in the country.

We signed [an agreement] with the University of Havana: They send out Used & Refurbished Siemens Mobile C-Arms, human resources to our community, and we train our doctors in the residency of family medicine right there in that area, living with the people and with our patients in the area.

[We] developed a sophisticated community volunteer structure to assist with facility construction. That was in spite of the lack of government healthcare infrastructure, but also, the idea was to … build transparency in the healthcare system. The women’s organization inside our community [planned so] we could go house by house and collect the people from each house, and [they] made a commitment that each house can donate at least 10 days of work for free, and select a person who was going to work. And then people started to build the facility [the First Garifuna Hospital]. And it continued to have sustainability and trust. … For us, it’s very important that we’re going to be focusing to develop a system of preventive healthcare and patient education focusing on the culture of the patient base.

In a documentary about your hospital, you were filmed saying, “We grow accustomed to the scraps they give us and we become beggars and scroungers for our own health.” Can you say a bit more about what that means and how you view nonprofit efforts or international aid, and if it disempowers people?
I think that this [hospital] is like a movement for dignity of the people, people who were fighting for the healthcare and for their rights for a long, long time. As a matter of fact, the Garifuna people arrived in that community on July 12, 1797, and for more than 200 years, they didn’t have a [healthcare] facility. And they are not on the agenda or a priority.

We became aware, when [our organization] grew in this area, of how people died. That had become like the normal life. It was not normal, but it had become like a normal life, an accepted reality. It had become an area where children die, women die in labor — [up] until today. Some people would [say], “Okay, maybe God wanted them to die.” And we didn’t agree with that.

And [that attitude] was very threatening to build a movement and build a kind of a bond with the people. That was part of the idea, to give it to the people. When they did the construction work, they can feel that this property, it belongs to all of us together. But it’s the reality of the poorest people in that area that they don’t have access to anything. And that can even become a part of the culture, that they are served badly, and not even just in those communities. It’s part of the reality in Latin America and the developing countries: Poor people are served less. And it’s also a reality for minorities, being a minority, you are served less.

In the documentary, you said, “We believe neutrality is the path of betrayal.” I thought that it was very interesting and a very strong statement.
If you were a doctor … you cannot be neutral to the pain of the others. You have to take a position. That is part of the democracy, to have positions, and people have to learn to how to deal with each other with their own positions, to respect each other’s positions. We are seeing every day the corruption inside the healthcare system in Honduras, which is one of the most corrupt systems in the developing world. … 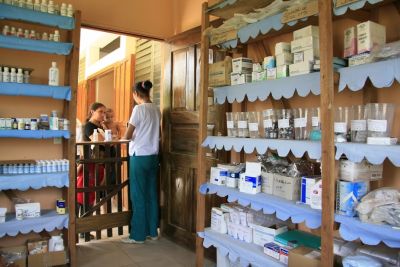 I’m wondering how people who are not from your area can best support you, or what is the best perspective or best action to take.
We have a program where people can sponsor a nurse for $3,000 per year. People can support these programs. Today, we are in the phase of construction of two buildings, one that will be a surgery area. And the other building is going to be an emergency area. The building facility is by the donation of the people who can afford to buy bricks, to buy rebar, to buy cement, to pay some people to do work for us, and we can put them on the list of our people who are donors. That’s how we do it.

Right now, we have the only one ultrasound in the whole area, for more than 60,000 people, and now it’s not working. So we’re looking for an inexpensive machine … Then we can provide better healthcare in those areas.

This interview has been edited for length and clarity.

The “Health Horizons: Innovation and the Informal Economy” column is made possible with the support of the Rockefeller Foundation.