January 16, 2014 by Jennifer Catracha No Comments

Honduran authorities suspended at least 32 people, including 25 police officers, and two narcotics agents assigned to Toncontin airport in Tegucigalpa during the time of departure of over 7 million unclaimed dollars, which went unnoticed in the suitcases of three Hondurans who were ultimately seized on Saturday in Panama.

The head of the National Directorate of Special Investigation of the National Police, Reuben Martel, told reporters that 25 officers of the Border Police assigned to Toncontin Airport in Tegucigalpa were suspended and will be replaced with “certified personnel.”

“The case is being investigated to be able to determine responsibilities … We’re going to be forceful, whoever might be responsible,” he emphasized.

The 25 (unidentified) officers were on duty last weekend when three Hondurans left Honduras’s Toncontin with eight suitcases containing money, said the Police Chief, who emphasized that they will “apply the law.”

Honduran authorities have additionally suspended five (unidentified) employees of the baggage and X-ray areas at Toncontin airport, who are being investigated in the case.

Spokesperson for the Public Prosecutor (MP – Ministerio Público), Lorena Cálix, earlier told reporters that the Attorney General, Óscar Chinchilla, suspended two narcotics agents also assigned to Toncontin airport. The decision to suspend the two agents of the Department of Anti-Narcotics was made so as “not to contaminate the research process” during the case. At this time, the Honduran Attorney General “has no evidence of the participation” of the agents in the transfer of the eight suitcases containing money hidden in false bottoms,” Cálix said.  The MP spokesperson also reported that Óscar Chinchilla sent a “judicial team to gather information about the arrest of the Hondurans and try to solve the case” within hours of being alerted of the incident. 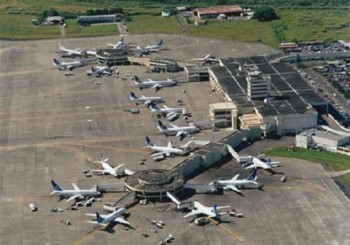 Honduras Police launched an investigation on Monday to find out how the three Hondurans managed to leave Toncontin Airport with over seven million dollars hidden in suitcases with false bottoms.

The Hondurans, who have been identified by local media as Melvin Calderón, Hugo Galdámez y Ramón Muñoz, were arrested last Saturday at Tocumen Airport in Panama, and remain under investigation in that country.

Panama’s anti-drug prosecutor, Javier Caraballo, said Monday at a press conference in Panama City, that funds seized from the Hondurans are suspected to be cash from drug trafficking.