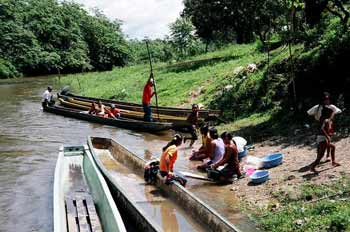 Victoria Tauli-Corpuz, the United Nations Special Rapporteur on the rights of indigenous peoples, said drug traffickers cut down trees to carve airstrips from the jungle, recruited Indian youths into the trade and bought up land to launder money.

Honduran Miskitos and other groups are demanding the government help them protect their territory in the swampy, heavily forested region.

“There is no protection basically from invaders who come in and occupy their land, whether these are agricultural land owners or loggers, and they mentioned that even drug traffickers are entering their territories,” Tauli-Corpuz said by telephone following a visit to Miskitos and other ethnic groups in western Honduras.

“Some of their lands are stripped of trees because they [traffickers] make a landing site” for drug flights, she said. “The young people don’t have livelihood activities, and so they are easy prey to these drug traffickers.” She also expressed concern at the trafficking and prostitution of indigenous women.

The Miskito complaints are similar to problems that led to confrontations in neighboring Nicaragua earlier this year.

In March, Indians in Honduras seized and then released some squatters they accuse of acting as pawns of big palm-oil planters and loggers to illegally clear the land.

Tauli-Corpuz, said the Honduran government is trying to raise money to compensate settlers for their eviction.

But in a report presented at the end of her visit, she stressed it was important for the government to investigate who was selling false land titles to the settlers, and who was behind the deforestation. She said she had heard reports of authorities involved in illegal land sales.

Indians also oppose the creation of national protected areas that limit access to their lands, and the building of hydroelectric projects in the region, she said.

The impoverished coastal area was the scene of a 2012 Drug Enforcement Administration-supported raid on river boats suspected of carrying drugs. U.S. drug agents and Honduran national police tracked an airplane loaded with cocaine as it entered the country from South America. The raid ended with two pregnant women and two men dead.

Tauli-Corpuz said the “victims have not yet received adequate reparations nor justice” for that raid.

In neighboring Nicaragua, the conflict burst into violence in September, when at least nine people were killed and 20 more wounded after the Miskito took up arms to try to expel a wave of newcomers attracted in part by the area’s rich tropical hardwood groves. Some settlers have also clear-cut tropical forest for cattle ranching.