OP-ED BY KAREN MUSALO | SPECIAL TO THE DAILY CAL

President Barack Obama declared the rising numbers of unaccompanied children and families entering the United States at our southern border “a humanitarian crisis.” But it is also a crisis of conscience raising the issue of how we as a nation respond to refugees seeking a safe haven on our soil. Instead of responding with compassion — or obeying our domestic and international laws — we have focused on deporting new arrivals and deterring others from following them. 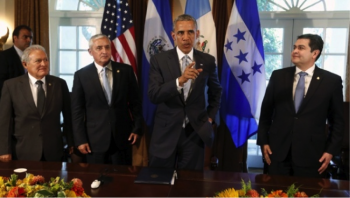 Look at the situation in the countries these immigrants are fleeing.

These countries also have extremely elevated rates of violence against women and girls, which may explain the significant increase in girls’ recent migration flows. El Salvador had the highest femicide rate in the world in 2011, Guatemala had the third-highest and Honduras had the seventh-highest.

Much of the societal violence is related to the increasing strength of organized crime and gangs throughout the region. They threaten or kill those who do not give into their demands, and they do so with virtual impunity due to the corruption and ineffectiveness of the governments of these countries. At the same time, there is a long history of violence in families and communities against women and children, with little government intervention.

The increase parallels the rising violence in Central America. Rather than welcoming the stranger “yearning to breathe free,” as the Statue of Liberty urges us to do, we have instead instituted what the ACLU calls “deportation mills” and turned military installations into detention centers whose occupants are denied adequate nutrition and medical care.

Anti-immigration politicians have blamed the U.S.’ perceived “leniency” for increased migration. Ironically, they singled out for harsh criticism the Trafficking Victims Protection Reauthorization Act, a law enacted with bipartisan support in 2008 and signed by former president George W. Bush. The act requires children be given time and opportunity to make their case for protection. In a shameful rush to satisfy the anti-immigration forces, Congress has discussed a number of proposals to gut the act of its protections for vulnerable children.

Obama missed the opportunity to take the high ground on this issue, and to point out that these children are in desperate need of protection. He should have followed the lead of an ecumenical group of faith leaders who set aside theological and political differences to call on lawmakers to provide increased assistance and on the American public to have compassion for these children. Instead, the president largely gave into political pressure, accepting at face value false assertions that most of the children are not eligible for protection and that they should be deported quickly in order to send a message to others who might flee to the U.S.

Punishing desperate women and children through draconian policies violates the spirit and letter of commitments the U.S. made when it became a party to the United Nations Refugee Protocol. It also violates U.S. law. Equally important. Equally important, this harsh approach is counterproductive. Women and children fleeing violence and violation of their rights will continue to come as long as these conditions persist. It would be more effective to work with countries such as El Salvador, Guatemala and Honduras to improve conditions and address the root causes of violence so that people can exercise their right to stay safely at home.

In the meantime, women and children seeking protection must be treated fairly in a manner consistent with our legal commitments. They should not be subject to accelerated hearings — “rocket dockets,” as they are called — that move large numbers of children through the system as quickly as possible, making it difficult for them to secure attorneys. Legal counsel is not provided by the government.

And they are not criminals, so they should not be detained. Under current policies, mothers with young children are detained in Artesia, New Mexico, and Karnes City, Texas, and a 2,400-bed detention center will open soon in Dilley, in southern Texas. These are, not coincidentally, remote locations, making it even harder to access the pro bono and nonprofit attorneys who are valiantly attempting to meet the need. Those who fail to obtain legal representation will appear in court alone, stacking the deck so harshly against them that the promise of justice becomes hollow indeed.

In the midst of these truly disappointing policies toward migrant children, there was a surprising development on the broader immigration front. After 15 years of controversy and litigation, the Board of Immigration Appeals, the country’s highest federal immigration court, issued the first binding ruling that recognizes domestic violence as a basis for asylum. The case involved a Guatemalan woman who suffered brutal and continual violence from her husband. The police and other governmental authorities turned her away because, as they told her, they would not get involved in domestic disputes.

Many of the women and children who have been fleeing to the U.S. have done so to escape similar situations, and the recent decision has had immediate impact. In the month following the decision, three women detained in Artesia who had also suffered horrific abuse at the hands of their male partners were granted asylum and released from detention. This sent a strong message to the Obama administration that it was off the mark in asserting that most of the women and children in this migration flow were not eligible for relief.

We hope that when Congress comes back from recess, it also comes back to its senses and reverses course on its attempts to eviscerate protections under our law. What is truly needed is a two-fold approach: protect those fleeing persecution and design and adopt policies that, over the long run, will eliminate the need for people to flee their home countries.

Karen Musalo is a professor of law at UC Hastings College of the Law and the director of the Center for Gender and Refugee Studies.