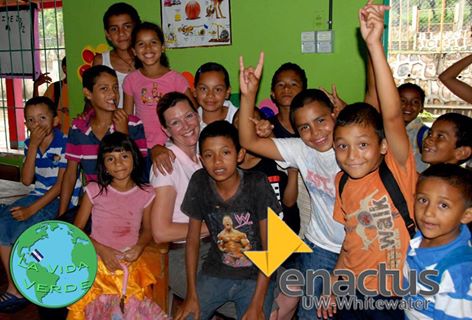 In October, the UW-W Enactus chapter decided to partner with the Florida-based nonprofit World Resources Group and launch the campaign, Hydroponics 4 Honduras.

A World Resources Group representative reached out to the Whitewater group about a year ago to see if the student organization would be interested in helping make 12 Honduran high school students’ dream a reality, said Leigh Olszewski, project manager and UW-W junior.

The students in Linaca, Honduras, came up with the idea of starting a hydroponic farm because the soil is too poor to farm using traditional methods and dry seasons lead to significant crop loss.

Hydroponic gardening is growing plants without the use of dirt or by using nutrient rich water. It also uses less water than traditional farming. The UW-W group is considering aquaponics that would introduce fish into the cycle. The fish produce waste that worms or microbes convert to fertilizer the plants filter from the water before it is returned to the fish.

The short-term mission is to raise enough money to purchase shelving, fertilizers, an irrigation system, a greenhouse and other tools for the students who are taking a stab at a sustainable business. Money also go toward business and agriculture training.

The long-term goal is to make the Linaca farm a model business and eventually bring the technology to other communities in Honduras.

The UW-W students have been in contact with agriculture and hydroponic experts as well as the UW-Stevens Point Aquaponics Innovation Center to come up with the best business plan, said Richard Guidry, UW-W Enactus president and senior.

The campaign began in early October ends at midnight Friday. As of Tuesday afternoon, $6,705 had been donated.

Linaca is in southern Honduras about 38 miles inland from the Pacific Ocean.

The median family income for a family of four in Linaca is $240 a month. The cost to send a single student to school is $50 per month, Guidry said.

“The kids there are doing things I would like to do myself, and they’re doing it with fewer resources,” Olszewski, said. “I figured the least I could do is help them get the resources needed to get this going.”

Guidry backpacked through part of South America last summer and spent a few weeks working for a small community’s farm, where he saw first-hand the importance of community agriculture. When he found out about the Honduran students, he envisioned his summer experiences.

Enactus, an international nonprofit entrepreneurial organization for students, has a 36-member chapter at UW-Whitewater. The UW-W chapter will present the Hydroponics 4 Honduras business plan along with other projects at a regional Enactus competition in March in Chicago.