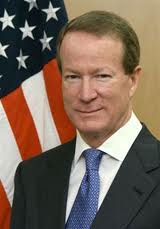 The US anti-drug Czar William Brownfield concluded Monday a 24-hour visit in Honduras announcing crime programs and donated 2 million USD, 30 motorbikes to the Police worth $229,000.

On his Sunday arrival, the Assistant Secretary and Director of the Department of States Law Enforcement and Drugs International Affairs Office said his government is determined to support Honduras’s efforts against drug trafficking and “Hammer Operation” for which AF chief Rene Osorio said he “has been given green light to act.

The visit was handled with extreme discretion and follows the failed Summit to address Guatemala’s initiative to loosen the grip on drug trafficking and consumption.

Brownfield himself termed the proposal by President Otto Perez, “useless” to fight the scourge, lamenting that the anti-drug front was displaced from Colombia and Mexico to Central America, “feeding violence and corruption.” We calculate in 90 to 95% the cocaine heading from South to North America in route through Central America, he assured.
Continue ‘US anti-Drug Czar Ends Honduras 24-Hour Call’ here.