Why Should We Talk About Honduras? 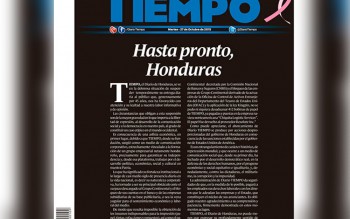 Image from Tiempo, of one of their last articles.

Here are some of the reasons why we ought to talk about Honduras; it is known notoriously as one of the most dangerous countries in the world, it is a place where a large number of people are from who try to get into the United States (in documented ways and in undocumented ways), it is the location of a extensively corrupt government (one of the mayors of a moderately small community is accused of being the head of a criminal group that is potentially responsible for close to 60 murders, in addition to killing livestock, as an example), one of the newspapers recently announced that tomorrow will be their last day of publication (Diario Tiempo, one of the newspapers connected to the “Continental Group” a large number of businesses whose work is tied to the bank owned by a family of alleged money-launders, currently under extreme government investigation with the assistance of authorities from the United States) which is a real shame in a country where journalists feel increased levels of threats and pressure from criminals to remain silent in the face of organized crime. These are not all of the reasons we should talk about Honduras, but this is a sample.

Honduras is a nation that should be talked about. Not just for negative reasons, because there are plenty of examples of Honduran excellence, such as Hondurans working in N.A.S.A., the National Anti-Extortion Force is another example of Honduran excellence (a security agency that works tirelessly to capture extortionists who use gangs and gang membership to steal money from small businesses, which contributes to the already somewhat thick taxes Honduran businesses face), as is the biology student (Madeleine Rodriguez) working to create a vaccine against Dengue. And between the “discovery” of the ruins in the jungle, and the discovery of a new type of coffee tree, there are biological and archaeological reasons for continued discussions about Honduras.

But there does need to be constant coverage of Honduras and events affecting Hondurans. The recent moves against the Rosenthal family, have caused waves as if some massive rock was just thrown into a lake, with unexpected albeit significant consequences. This decision by the U.S. Treasury Department, while morally the correct move, has begun to take on a life of its own, with families at a national level facing sudden loss of employment due to the Continental Group basically going under, even as the government has made promises to work to protect businesses connected to the bank and to the group. It is unclear, at this point in time how committed to those promises the government appears to be. Given the work of journalists in general, and Hernandez’s history of threats to journalists (which includes at the very least enabling police officers to beat journalists), and using the National Telecommunications Commission (Conatel) to harass radio stations and news networks nationwide, people can and should be suspicious of the politics behind Tiempo’s announcement, especially on the Honduran end of the investigation into the Continental Bank. Sadly, it is entirely possible that the closing of Tiempo will go largely under-discussed in English.

So what can be done? If publications in Spanish begin to go under throughout Honduras, whenever ample opportunity presents itself, then this should cause English publications to move in. And maybe even cause international business-people to appear and work with businesses like Tiempo to provide actual protection for the employees. English is spoken throughout the country, and English newspapers might well have a bit more resilience to government pressure (at the very least, the Honduran government) than ones in Spanish do. Additionally, this would be an ideal time for journalists from other publications to step in and ask their newspapers to work with the unemployed journalists throughout the country and work to make sure that as many of them as possible can continue to put food on the tables of their families.

As both nations (the U.S.A. and Honduras) slowly inch closer to the next presidential elections how would-be presidential candidates from both countries would interact as national leaders is going to become increasingly important. In both nations, these elections present potentially the most significant in history to-date. In Honduras it is connected to the possibility of a reelection, for the first time in over 30 years, and in the U.S.A. it is connected to the possibility of a female-president, presidential candidates who have no experience in politics (unless one counts corporate politics), or a president who would enact changes which could potentially change how capitalism affects citizens of the U.S.A. and change the “drug-war” which is one of the things which has important affects on Honduras and the sort of U.S. aid Honduras receives. But without independent publications, platforms for real conversation about the politics of Honduras could slowly disappear.

Honduras needs journalists and journalists need protection from a widening variety of threats. And we as English speaking people, and people who have some sort of interest in Honduras can work to help them, by asking real questions about Honduras that require investigative journalism. We can band together to make sure journalists in Honduras are respected by government officials. We can work, regardless of where we are originally from, to make sure journalists receive the proper amount of respect their hard work deserves. And it is time that we speak about the threats journalists face, which is part of the reason why we should talk about Honduras.

*This is an opinion and original article, if you would to leave some feedback, leave a comment below or contact the author*