September 9, 2013 by Melton Stanley No Comments

A collapse in the road near El Balin, Santa Cruz, Yojoa, prevented vehicular passage between San Pedro Sula and Tegucigalpa during Saturday night and Sunday morning.

A collapse of mud and rocks occurred near the community of  Los Chorros, where a recent tragedy resulted in the death of six children when the walls of the house where they slept fell down from the over saturation of soil. 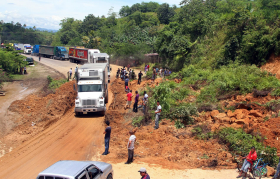 According to residents of the area, the landslide on the road occurred about 8:00 pm Saturday and covered the entire surface. They reported that for three hours a heavy rain fell.  One resident was thankful, “Fortunately there was no traffic at night, and on Sundays the flow of vehicles is slow.”

Villagers began the task of digging out the road with spades and hoes; they worked from the early hours of the morning. It was not until noon that they were able to break through to the pavement to allow the coming and going of vehicles.

Residents argued that they were not government employees, and had damaged their own tools, so they were charging between 10 and 20 Lempiras to drivers to allow their vehicles to pass.

It was not until noon that the state authorities sent earth-moving machinery to the area.

The authorities of the Permanent Contingency Commission (Copeco) reported that rains in the past hours have increased the risk of landslides, mudslides and flooding due to soil saturation.

Due to rainfall accompanied by gusty winds and electrical activity, Copeco changed the green alert to yellow for 48 hours for the Cort&eacute;s municipalities adjacent to the Ul&uacute;a River basin.

On green alert are the departments of Cortés, Copán, Ocotepeque, Santa Bárbara, Comayagua, Choluteca, Valle and the Central District (Tegucigalpa and Comayagüela).