Zelaya Accepts No “Agreement” Returning Him to the Presidency of Honduras

The following is an interpretation and translation of an article appearing in the Honduran Newspaper, “El Heraldo”. The original article (spanish) can be read here.

A solitary Manuel Zelaya, a refugee without power in an embassy of another country, has decided he will not comply with the agreement that his own delegates signed.

The former president confirmed his position in a letter full of spelling errors and inconsistencies, which was sent yesterday to President Barack Obama, who he accused in several paragraphs, of furthering the crisis in Honduras.

In truth, Zelaya had been clear in stating repeatedly that he would respect any agreement reached among the Honduran dialogue. Thus, the negotiating teams of Manuel Zelaya and Roberto Micheletti on October 30th, signed the Tegucigalpa-San José Agreement.

This agreement provides in paragraph 5, the most important, that the National Congress could roll back the Honduran government to the state it was in before June 28th.

Although the proposal, that Congress was to decide upon his reinstatement or not, came from the same commission representing Zelaya, including Mayra Mejia, Rodil Rivera and Victor Meza, Zelaya decided after signing the agreement, not to fulfill it. Including the part that he would help form a Government of National Unity and Reconciliation. This government was to be formed on November 5th, but that was not possible because Zelaya refused to send a list of 10 candidates for positions in the unity government. This decision left an uneasy feeling within the international community, which saw that the former president was defying the agreement. Zelaya then decided to remove his deputy, Jorge Arturo Reina, from discussions with the Verification Commission, despite the fact it was precisely the commission’s role to help negotiate differences that might arise surrounding the implementation of the agreement.

Thomas Shannon, Assistant Secretary of State in the U.S., and leading advocate of signing the agreement, confirmed, a day after signing the document, that the formation of the unity government had nothing to do with the possible reinstatement of Zelaya to the presidency. Zelaya protested Shannon’s statements, and requested in a letter addressed to Hillary Clinton, to clarify whether the U.S. had changed its position on what happened in Honduras on June 28th. The State Department replied that the U.S. position remained the same, however, they emphasized that they would respect the agreement that was reached by both parties.

Following the signing of the Tegucigalpa – San José Agreement, several countries announced the immediate dispatch of election observation missions to oversee the elections of November 29th. Zelaya, however, began to make calls from the Brazilian Embassy to boycott the elections, contrary to the spirit of the agreement, which provides for unrestricted support of the elections.

In his letter to Obama, Zelaya basically says the Tegucigalpa-San José Agreement was invalidated, because the 12 points were not to be followed independent of each other. Therefore, Zelaya now believes he is not willing nor obliged to meet any of the remaining 12 points, including in the electoral process.

The EU announced it would not send an electoral mission only due to the lack of time, but did confirm they would send two experts on electoral issues to help with the process. Colombia returned its ambassador and announced that Sonia Pereira recognizes the elections. Also, the President of Panama announced yesterday that they will recognize the elections and the newly elected president thereafter.

José Miguel Insulza, however, despite being the Secretary of the OAS and guarantor of the agreement, ruled out sending observers for the electoral mission. Insulza had stated on many occasions that he would respect any decision they made in Honduras. The decision that followed, was that both parties would accept the resolution of Congress.

Some lawmakers complained that they received threatening messages, but warned that democracy and the fight against corruption has a price, and therefore would decide on his possible reinstatement on the basis of law. The committees of Zelaya and Micheletti had both acknowledged that Congress would be the ultimate expression of the representation of the people.

As if this were not enough, Zelaya has begun to lose his main strongholds in the media. The former Zelaya supporter, Eduardo Maldonado, decided to come aboard the democratic ship and declared the elections “are legal”. Zelaya is now lonely, abandoned by his “friends”, with 18 indictments for crimes against corrupt politicians, powerless, and relegated to staying inside the Brazilian embassy, where he has been since Sept. 21st.

So ends the sad story of a man who tried to illegally implement a fixed consultation, not imagining that a whole people, along with brave military leaders committed to the country, would hinder his attempt to abuse and destroy the Constitution, the state of law, and the democratic system.

“I do not accept any agreement that returns me to the Presidency.”

In his letter to Barack Obama, former President Manuel Zelaya declares: This election is illegal because it hides the military coup, and the de facto state Honduras is living in provides no guarantees of equality and liberty in public participation …

… In my capacity as President, elected by the people of Honduras, I reaffirm my decision that from this date forward, whatever the case, I do not accept any agreement to return to the presidency. 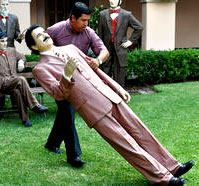