The sun beats down. It does so fiercely. At this moment however, I remain cool . I happen to be sitting below the kind, encompassing shade of a large Palm tree. Crisp, white grains of sand slide between my toes as I stand up. I do so in the attempt to see if any ‘coconut bread’ vendors are coming along. So they are. Sliding back down the Palm’s trunk I arrange myself comfortably on the dry sand. A bronzed coconut rolls off another near tree and thumps upon the neatly attended beach. Some local children run past me, one shrieks in laughter whilst the other wrestles the small, excited child onto the ground. A teenage girl cackles ‘allí te tiene!’ or ‘he’s got you there!’ I chuckle. Along comes the coconut bread seller, an elderly Garifuna woman, her wrinkled, weather-beaten black face shines in the blazing sun. Smiling radiantly, two aged hands dig deep into the plastic tub from which she then produces a bag of individual pan de coco. Homemade Coconut bread at 30 Lempira. I buy a full bag. ‘Gracias mi amor’ she beams. On her departure I return to sitting below the Palm tree. Salsa music flows over from a nearby bar. The clear, blue sea glistens out beyond. It is indeed quite something to ponder, that I live in the most dangerous country in the World…

Honduras, is a Central American nation suffering from what is an absurd reputation. The title is without doubt far more ‘absurd’ than the said reputation. ‘Murder capital of The World’. Beyond sensationalist in its approach, the World Media has taken a nation both unknown and subsequently misunderstood and rashly labelled it as a country more ‘dangerous’ than any other. This has been done chiefly as a result of the high homicide rates. Most murders in Honduras being drug/gang related. Organised crime is a serious and indeed overwhelming social problem in Honduras. Poverty stricken, as is most of Latin America, the reasons for high crime rates are not hard to imagine. A schoolteacher (this being regarded as good work in Honduras) might make the equivalent of £1.00 an hour. That is the salary of the average maestro. The vast majority of Hondurans struggle (‘struggle’ being an understatement) economically. Due to such a poor economy there has been in recent decades a growing rate of crime. Due to a relatively close proximity with the United States, drugs trafficking is a well-paid venture. This is not just Honduras however. This is Latin America. The same story can be told in Mexico, El Salvador, Nicaragua, Guatemala, Colombia, Venezuela or Brazil. In Mexico, there have been cases of cartel members rolling the severed heads of business rivals onto nightclub floors. Down in El Salvador, if a teenage girl does not wish to join a local gang, she is henceforth subjected to what is known as ‘the train’. The gang-members rape her one after the other. In Brazil, transvestites or gay men have been beaten or burned to death in gang-controlled neighbourhoods. These cases (all related to organised crime) are not common in Honduras. Similar and indeed grotesque things have occurred, yet not on the same level as in other nations. Therefore, one must ask: ‘how is Honduras anymore dangerous than its neighbours?’. The answer being simple – ‘it isn’t’.

Sat once again, I find myself talking to a neighbour. He remains ‘perched’ upon a railing as we look out upon the view. A young father of two; he appears skinny as a whistle, his jet black hair closely cut against the scalp. Two piercing brown eyes study the distance as his hands wipe trickling water from his freshly bathed face. He speaks in a quiet yet fast paced and grotesquely slang-ridden speech. “Sí yo no pago aquel man me va a montar pija viejo!” It doesn’t translate very well into English. “If I don’t pay that man he’s going to mount me s*** old guy!” My neighbour simply explained (using his colourful Honduran/Latino slang) that if he wasn’t able to pay a debt then the man to which he owed money – would bring him many problems. Life was not easy for this fellow. It was there that I found myself living in a dilapidated apartment block. My neighbours comprised of U.S deportees, single mothers, ex-cons and marajuana-addicts. I have however, never had a better set of neighbours in my life. Everyone got on with and looked after each other. Why? We were neighbours. We shared the top floor together. Therefore what other excuse did we need in looking out for one another? Working as an English teacher in a school by day and at a language academy at night, I experienced the day-to-day of Honduran working life. Many, many hours and little pay. Everyone here lives in debt. One owes money to friends, relatives, shop owners, neighbours, schools, universities, random acquaintances or worst of all – loan sharks. ‘Debo a todo Tela’ a woman recently told me, chuckling to herself. ‘I owe all of Tela’ – Tela being our city. Exotic in its ambience, relaxed in its manner – Tela, nevertheless is almost ‘magical’. 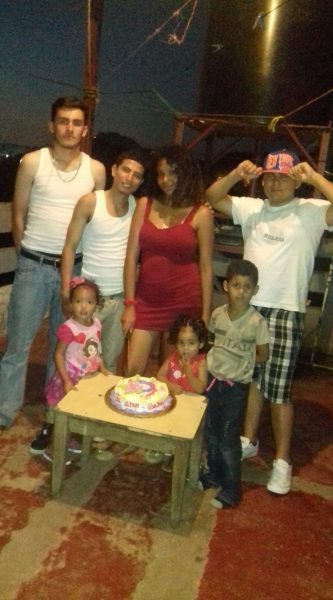 Celebrating a birthday amongst the neighbours

So yes, Honduras is indeed poor and Hondurans indeed struggle. These are however a people who withhold an inner kindness quite contradictory to their tough surroundings. That same neighbour I mentioned, would wake himself up at 5.30am in order to make me coffee. He insisted that I could not start my working day without it. All I was to him was a neighbour. Who on earth would do that for me back in England? – I pondered. On another occasion, I recall being in search of a Honduras national football shirt. The search was for a fellow colleague – not myself. This was back in 2014 when I worked as a volunteer in the mountainous region of Lempira. During our search, I eventually stopped to ask a random stranger on the street. I saw the man wearing one such shirt and so I asked where he had bought it. He shone a beaming smile, the stocky fellow then spun himself around and indicated that we follow him. The man walked us a good three blocks until we arrived at a large store with an array of football shirts hanging from its second floor windows. Smiling at us again, he nodded his head, waved and walked himself right back from where he’d came… Nobody would walk themselves three blocks out of their way for two foreign travellers where I come from. Not for anybody in fact – no way. I mean, I wouldn’t even think to do it. How peculiar it is indeed, to meet such amiable characters within ‘the most dangerous country on earth/the murder capital of the world’.

There are dangers here. This cannot be denied. I have heard of people being killed, tortured, raped, robbed and all the rest. Is this something native to solely Honduras though? Are we to say that such atrocities do not occur elsewhere? Of course not. Henceforth – I must demand, that this nation is not singled out. Here in Tela, there is no danger. The city’s ‘Mara’ watch over its citizens. ‘Mara’ is a term meaning ‘gang’ or ‘gangsters’, ‘Mara Salvatrucha 13/MS-13’ being one of Central America’s two largest street gangs. Robberies are seldom committed. Rape does not exist. Why? Tela is known as a place of calmness and good times, the city is a Caribbean delight. For the gangs, anything jeopardising this reputation – is bad for business. Therefore, petty criminals fear the repercussions. Any Teleño will tell you that “aquí Las Maras cuídan a la gente”. “The gangsters look after people here”. When living in a poor coastal community by the name of El Porvenir, I myself came into contact with some teenage gangbangers. A mixed race fellow known as ‘Clay-Clay’ had been involved in a fight with someone I knew. One afternoon I approached him when on his own. On asking the bare-chested and chain wearing youth what happened he replied softly, staring up at me with his dark, brown eyes. “Oye blanquito, no te preocupes, a vos te vamo’ a cuídar”. Expecting at least an aggressive answer from someone who was suspected locally of murder – he instead told me: “Listen little white guy, don’t worry, we’re going to look after you”.
My time in Honduras thus far, amounts all in all to a year and three months. I am ‘surprised’ shall we say, to have never even seen a single act of violence in the ‘murder capital of the World’. The point being, I advocate some reasoning or better still – some education…

By Ben Anson
Based in Tela, Honduras