On Friday night at the North Logan, Utah Library, Katyrra Peck, 13, used a small brush to paint vibrant colors on a spinning top.

But the toy isn’t for her own amusement; it will be shipped to Honduras for kids to play with. 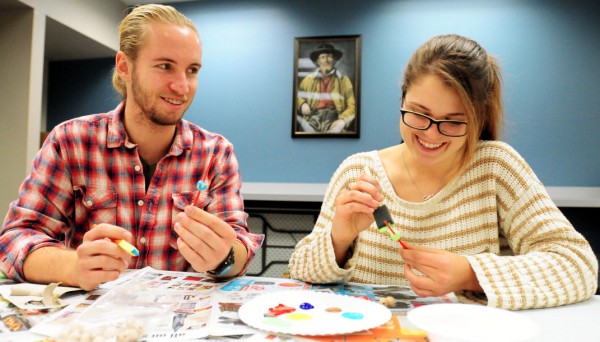 “I hope they will like them, not just look at them,” Katyrra said of the toys.

The 13-year-old was just one of several community members who came together in the library on Friday to make inexpensive, hand-crafted toys for children in the third-world country, thanks to efforts by Candle of Light Vela de Luz.

The toys community members made included: A ronron, a toy made from a string with a button strung through it; a jacks set, using multicolored beads and rubber balls; a marble set, using small, painted rocks and large beads; tops, using painted, small wooden beads.

The group’s co-founder, Alena Peck, said community members probably churned out at least 100 toys Friday night. They’d like to get 500 by the time they go to Honduras in 2018.

Candle of Light Vela de Luz — founded by Peck and her husband, Sharik — teaches personal care and standard-of-living skills to people in third-world countries by using local resources to make a safer home. People in Honduras have made bug repellent out of herbs or reusable feminine hygiene kits, for instance.

“We want people to use the resources they have in their own countries, so they can live better lives, so they don’t have to rely on humanitarian efforts,” Peck said.

Peck said she and her husband were inspired to form Candle of Light Vela de Luz after a trip to Ecuador in 2014.

“There were so many people that needed help; but I didn’t want to do something everyone else was doing,” Peck said. “I wanted to do something more unique — there are a lot of other services that can be offered to the countries, but they’re often overlooked because they’re small.”

In Ecuador, Pecks learned that while many children of third-world countries enjoy American brand toys, they’re often stolen or pawned because of their value.

The toys that Candle of Light Vela de Luz will bring them, like the ones made at the Logan Library, will be less likely to get pawned or stolen, and kids will still be able to enjoy them, Peck said.

“We’re hoping these kids will be able to play with these toys a lot longer, rather than getting stolen,” she said.

Cheryl Peck, the mother of Sharik and volunteer for Candle of Light Vela de Luz, said the group is scheduled to go to the Philippines late next year and Honduras in 2018.

“We realized a huge need to share the blessings we’ve been given with people that don’t have as much,” Cheryl said of her past trips to Latin America with Candle of Light Vela de Luz. “They can be happy with very little.”

John Thompson, who served a mission for The Church of Jesus Christ of Latter-day Saints in Honduras, said his experience in the country motivated him to come help out Friday.

“These toys are new, creative, something they haven’t seen before,” Thompson said of the toys and the children in Honduras. “These are not going to be used for profit or bad intent.”