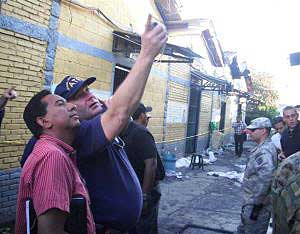 Honduran and ATF electrical engineers discuss electrical wiring at the Comayagua prison in order to determine the cause of the devastating fire. (ATF Photo)

TEGUCIGALPA – After completing its investigation and analysis of the site of the Tuesday, February 14, 2012 fire at the Comayagua prison facility, the U.S. Bureau of Alcohol, Tobacco and Firearms’ (ATF) International Response Team (IRT) working in conjunction with Honduran authorities from the Public Ministry, National Criminal Investigation Directorate (DNIC), and the Honduran Fire Department have determined that the cause of the fire was accidental.

Based on the IRT’s findings, the cause of the fire is believed to have been an open flame (the source of which could include, but is not limited to, a cigarette, a lighter, matches, etc.), although the actual ignition source was not recovered. The fire is believed to have begun in the area of the top two bunk beds in the fourth column along the western side of the prison’s module six, which ignited nearby flammable materials. During the course of the investigation, the IRT was able to rule out other possible causes of the fire, such as a lightning strike, electrical causes, or the use of a flammable or combustible liquid.

Based on its findings, the IRT will prepare a formal report to be submitted from ATF headquarters to the U.S. Embassy in Honduras for passage to the Honduran government.

While the cause of the fire has been classified as accidental, this tragic event has focused attention on inadequate safety practices within the Honduran prison system, such as overcrowding, the presence of flammable materials, insufficient personnel on duty, and the lack of a viable evacuation plan for inmates. The United States urges swift action in devising and enacting necessary reforms to ensure the safety, health, and human rights of Honduran prisoners in order to prevent similar tragedies in the future.