EARLY IN THE MORNING on March 3, in La Esperanza, Honduras, unidentified men broke into the home of the environmental activist Berta Cáceres and murdered her. Cáceres was the cofounder of the Civic Council of Popular and Indigenous Movements of Honduras (COPINH) and the 2015 winner of the Goldman Environmental Prize, and her murder has prompted an international outcry as well as investigations supported by the United Nations and the FBI. The Mexican environmental activist Gustavo Castro, who was staying in Cáceres’s home in hopes of deterring violence against her, witnessed the murder and was subsequently detained by Honduran authorities. Amnesty International has warned that Castro, who was shot twice in the attack, is in “grave danger.” 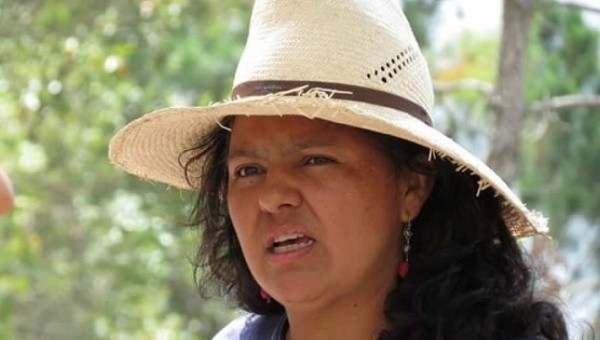 Cáceres’s activism spanned several issues, including indigenous rights, feminism, LGBT rights, and environmentalism, but recently, “more than anything,” her sister Agustina Flores told me, “it was Agua Zarca,” a proposed hydroelectric dam project, which was to be built on the territory of the indigenous Lenca people. Flores, a retired teacher, says that Cáceres had received repeated death threats related to her work. The threats were so serious in recent months that the Inter-American Commission on Human Rights repeatedly called on the Honduran government to provide her with protection. Her sister said that protection was never provided. “We have feared for her life for a long time,” Flores said in a telephone interview, adding that in November, Cáceres told her she was being “seriously harassed” by three local politicians who she believed were acting at the behest of Desarrollos Energéticos, SA (DESA), the private energy company behind the Agua Zarca dam.

DESA is partially controlled by the controversial Honduran Atala family, whose members are involved in a variety of business ventures and suspected by many of having backed the 2009 coup. Best known among them is billionaire Camilo Atala, president of Banco Ficohsa, a regional bank that in 2014 acquired most of Citibank’s assets in the region, making it the largest bank in Honduras.

The board of directors of the company that is carrying out the Agua Zarca hydroelectric project has not given any declaration nor does it plan to do so until the authorities in charge of the investigation determine the causes and perpetrators of this regrettable incident that ended the life of the indigenous leader Berta Cáceres. This, as is logical, is in order to not provoke any more speculation than what already exists and which is spreading among public opinion around what happened.

Agua Zarca also received financing from the Central American Bank for Economic Integration. The original contractor hired to build the dam, supported in part by the World Bank, was one of the largest hydropower engineering companies in the world, Sinohydro Group. For more than a year, in 2012 and 2013, community members formed a human barricade to block construction of the dam, while COPINH led a national and international advocacy campaign to highlight the environmental and cultural destruction the dam would cause. DESA’s private security guards and the Honduran military responded with a campaign of violence and intimidation.

“The army has an assassination list of 18 wanted human rights fighters with my name at the top,” Cáceres told Al Jazeera in December 2013. “I take lots of care but in the end, in this country where there is total impunity I am vulnerable,” she continued. “When they want to kill me, they will do it.”

Eventually, both Sinohydro and the World Bank pulled out of the dam project and it is currently on hold.

Cáceres’s family strongly believes that someone involved with Agua Zarca ordered her execution. Her children have circulated a press release in which they name DESA, the various Agua Zarca funders, and the Honduran government for its failure to protect their mother. On March 3, Agua Zarca felt compelled to issue a statement denying that it was involved in the murder. “Agua Zarca roundly affirms that there is no direct nor indirect connection between the project and the regrettable event that ended the life of the indigenous leader.”

Last year, the group Global Witness named Honduras as the world’s deadliest country for environmental activists. “There is a straight line between environmentalist activism and assassination in Honduras,” said Dr. David Wrathall, a United Nations University geographer who studies Honduras. Over the last decade, Central America has become awash in drug money, Wrathall says, which frequently ends up entangled in large-scale agriculture and development projects such as dams.

“Big public infrastructure works are the most corrupt sector in the global economy, even more than oil or the arms trade,” said Peter Bosshard, an expert in dams and corruption at International Rivers. Although Honduras does have laws on the books that require environmental impact analyses (EIA) to be performed before a dam project can go forward, practically speaking, these reports never recommend against a project. “You will never see an EIA that says, well, the impacts of this project are so severe that we recommend not going forward,” said Bosshard. “Even though that’s the point of the EIA.”

Marco Tulio Carrillo, a spokesperson for the Honduran Ministry of the Environment, which awards dam permits, said that he had “no knowledge with respect to the subject” and that “it should be under investigation.”

“Whereas powerful landowners, businesses, and politicians have resorted to violence against activists in the past, now these actors have more illicit enterprises and transactions to hide, coupled with unrestrained capital and a reserve army of hit men,” Wrathall said. “So it’s anti-environmentalism (literally) on drugs.”

Honduras Is Open for Business

Cocaine has moved through Honduras for many years, but the quantities of the drug entering the country soared in 2007 when the U.S. succeeded in squeezing shut the old route from South America through the Caribbean and Mexico. Now, according to a recent State Department report, about 90 percent of the cocaine destined for the U.S. passes through Central America and Mexico, and the Northern Triangle (Guatemala, Honduras, and El Salvador) has some of the highest homicide rates in the world.

Conditions worsened after the 2009 coup removed President Manuel Zelaya from office. As Berta Cáceres eloquently states in this video interview from 2014, the coup, which was supported by the United States, created an atmosphere of violence and terror. Before the coup, the Zelaya administration had successfully blocked many hydroelectric projects, but the new government immediately began approving the projects en masse. In June 2010, 40 contracts were approved for a series of dams. When President Juan Orlando Hernández came into office, his rallying cry was “Honduras Is Open for Business.”

Berta Cáceres and COPINH saw development differently. Progress for them meant an ability to raise their families on their sacred ancestral lands, and a society in which power was distributed more equally. When those dreams were threatened, COPINH protested. “Berta loved to say, ‘They fear us because we’re fearless,’” wrote Beverly Bell, a U.S. activist who knew Cáceres for decades, in a eulogy she sent via email to The Intercept. “The fearlessness paid off over the years. COPINH has successfully reclaimed ancestral lands, winning unheard-of communal land titles. They have stalled or stopped dams, logging operations, and mining exploration — not to mention free-trade agreements. They have prevented many precious and sacred places from being plundered and destroyed.”

Cáceres’s family has demanded an investigation not only into who committed the murder, but also into those who ordered it. The office of the Honduran attorney general has refused to comment, declaring its investigation secret. “We don’t want Honduran investigators,” said Cáceres’s sister, Agustina Flores. She said that the FBI had been to their family home to interview her brother. “They said they’d received orders from their government to do everything possible to solve the crime.”

Some U.S. officials have echoed the family’s demands. Two days after the murder, in a letter read aloud at Cáceres’s funeral, Sen. Patrick Leahy of Vermont demanded an “independent and comprehensive” investigation, adding that “the Rio Blanco and the territory that Berta devoted her life to defend should be protected. The Agua Zarca dam project should be abandoned.”

According to Annie Bird, an activist currently staying with Berta’s family in La Esperanza, the course of the Honduran government’s investigation so far is worrisome: Gustavo Castro and COPINH leadership are “being intensely questioned,” without lawyers, and the line of questioning suggests the government plans to argue that COPINH is behind the murder. There is “no indication that they have been investigating DESA or DESA guards.”

Before being detained by Honduran authorities, Gustavo Castro, the Mexican activist who witnessed the murder, denounced the investigation in an open letter, saying that the scene of the crime had been altered by authorities. Castro was initially given permission to leave the country, but when he arrived at the airport in Tegucigalpa, officials took him back into custody, saying they needed to return him to the crime scene for more questioning. On March 7, Castro was told that his detention would last at least 30 days. According to Amnesty International, “He fears that the authorities are trying to keep him in Honduras so that the assassination attempt against him can succeed the second time.”

Cáceres’s family and friends are determined to bear witness to the extraordinary example of her life and work, and the community to which she belonged. “I saw Berta die in my arms,” Castro wrote in his open letter, “but I also saw her heart planted in every struggle that COPINH has undertaken.”