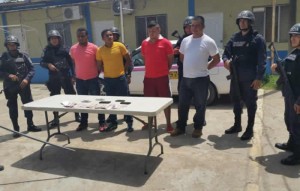 The men arrested in Trujillo are believed to be members of the gang “El Limon”.

Four alleged kidnappers were captured Tuesday in a gas station in the city of Trujillo, in the department of Colón, in eastern Honduras.

The arrested males are Adonay Javier Morazan Pacheco (31), Óscar Alexander Rosales Cruz (23), Kendal Jevel Cruz Montes (21) and Junior Jasmani Ramirez Cruz. All were detained for the crime of kidnapping. The individuals are believed to be members of a notorious gang, “El Limon” (The Lemon).

At the time of the arrest, the suspects were seized in a taxi vehicle numbered 0297, and in possession of 10,000 lempiras and seven mobile phones.

The persons held for kidnapping were also accused of extortion, they will be presented before a judge.