100 of the poorest families in Honduras will have an area to call home in the coming months. 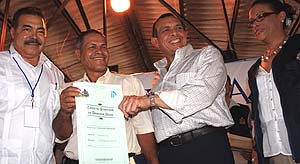 President Porfirio Lobo Sosa, and the Director of the Board of the Institute of Property, Hugo Vasquez Velasquez, presented two thousand seven hundred land titles to families during a ceremony held at the 105th Infantry Brigade in San Pedro Sula on Thursday.

This disbursement was made possible through the “Property Law”, which was created when President Lobo Sosa served as head of the legislature in 2004. The law was designed as an expression of interest and commitment to help families who have struggled for decades for the legalization of their property.

Most of the households grateful for the paperwork are from the municipalities of San Manuel, La Lima, Cofradía, Villanueva, and Choloma in the Department of Cortés, and El Progreso, in Yoro.

In his speech, the Honduran President announced the allocation of 106 million lempiras to the Institute of Property (IP) for the delivery of 100,000 titles this year, and ensured that the Government aims to issue more than 200,000 more titles, totaling 300,000, by the end of his administration. He noted that there are just over 600,000 families who have fought for decades to assert their rights to property.

“My commitment is to fight for the right to a piece of land for all the inhabitants of the most vulnerable areas, and if we have to make improvements to the Property Law, we will,” he said.

The Chief Executive plans to create an inter-agency committee with the participation of the Ministry of the Interior and Population, the National Agrarian Institute (INA), the IP, and representatives of the National Confederation of Trustees of Honduras (CONAFEPH) to resolve the delinquent land issues, and settle any problems of authenticity.

“I will not go back on my word; when something is right, you take a stand, and the working class and peasants still have me as an ally,” he emphasized.

President Lobo announced that on March 19th, he will hold a conference with organized groups in ​​Cortés to support the “Great Regional Dialogue.” During this meeting, the Government of National Unity will have answers for the families that, for over 30 years, have been without land titles.

The chairman of the board of the IP, Hugo Vasquez Velasquez, believes that the transfer of land titles to the poorest families is an example of the human side of the Government of National Unity. He stressed that in less than a year, the Government, through the IP, has awarded 4,000 land titles in Tegucigalpa, 400 in the Bay Islands, and with Thursday’s presentation of 2,700 in San Pedro Sula, and the consent of the president, he ensured the delivery of over 10,000 scripts in 2011.