Honduran President Misses Out On a Baleada

President Juan Orlando Hernández may have been wanting a baleada today, but instead enjoyed a hamburger with the US Ambassador to Honduras, James Nealon.

The president was fulfilling his promise to treat the ambassador to a hamburger if Honduras lost to the United States in the 2015 Gold Cup Soccer tournament. The United States won the match with a 2-1 win on July 8th.

If Honduras had won the match, Ambassador Nealon would have presented our Honduran President with a tasty baleada. 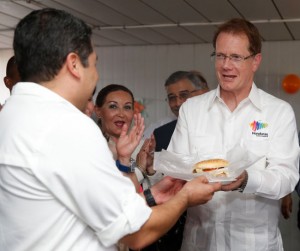 The President of Honduras Presents a Hamburger to US Ambassador, James Nealon.

“Chuy’s Burger” was responsible for preparing the delicious hamburgers which were eaten by both President Hernández and Ambassador Nealon. Chuy’s Burger business was started with the help of a program for entrepreneurs sponsored by the United States Agency for International Development (USAID) in Tegucigalpa.

Last week, the US diplomat challenged President Hernández before the Gold Cup game between the United States and Honduras. President Hernández agreed to the wager, explaining that if Honduras were to lose, he would honor his commitment after the inauguration of the Youth Outreach Center in Comayagüela.

“Very good, this shows me that Honduras can produce very good burgers,” said the US Ambassador as he munched on a hamburger alongside the Honduran President.